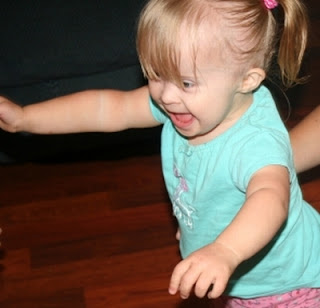 This post is inspired by Ruby's Mom!
1.Esther is loved by God, and made in His image.
2.Esther is loved by her ten siblings, two parents, three grandparents, and lots of uncles, aunts and cousins!
3.Esther's Daddy knew she was going to be a special child even before she was born.
4. Esther Heavenly Father blessed her with an extra Chromosome that made her special before she was born.
5. Esther spent 11 of her first 16 weeks in in the hospital.
6. Esther had a VSD and an ASD that were repaired when she was just 3 months old.
7. Esther has low thyroid, and has trouble with aspirating liquids when drinking, but we thicken all her liquids and she does great now!
8. Esther loves unconditionally
9. Esther loves to laugh!  She also love to make others laugh
10. Esther learned to sit up at 8 months.
11. Esther learned to crawl just past 1 year of age
12. Esther learned to walk just last week (she is 25 months old)
13  Esther LOVES to read books!
14. Esther loves to push things around the house while walking behind them!
15. Esther loves it when we clap for her accomplishments
16. Esther can do most of the motions for "Itsy Bitsy Spider"!
17. Esther loves to give hugs (she pats you on the back - it's so sweet!)
18. Esther sucks her thumb.
19. Esther loves music...especially when falling asleep!
20. Esther loves ice cream
21. Esther loves to climb the stairs...up and down...up and down...up and down....