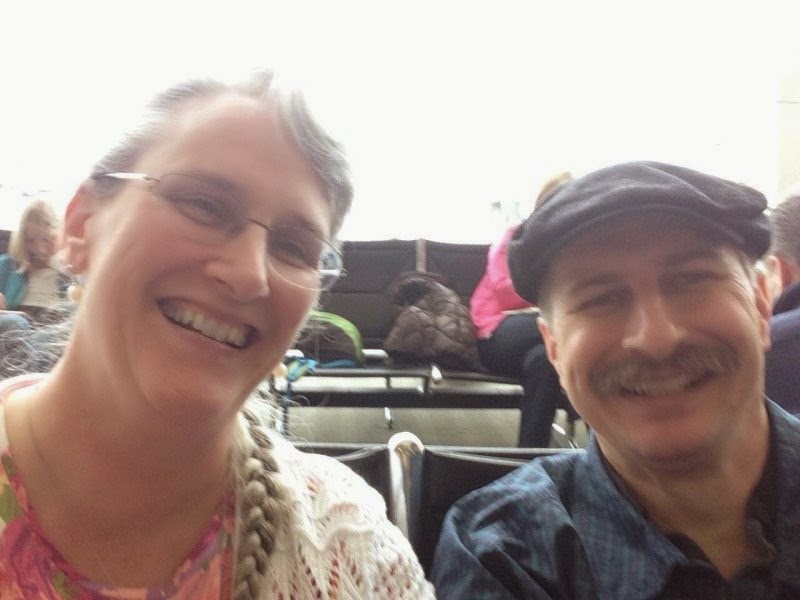 We left home early Sunday morning to head to SeaTac.  Just to be safe, we left very early.  It worked great - we were 3 hours early.  But I'm OK with that.  We settled in for the long wait, got some lunch and all went just great.  We even got our third check in luggage checked for free when we explained that we were flying for an international adoption of a child with special needs!

Our first leg was flying into Chicago.  The flight was fine, our layover in Chicago was just enough time to get where we needed to go and get a small break between flights.  We also grabbed dinner as the first flight only served beverages.

The second flight, the LONG one (8+ hours) was a rough one.  We were sitting up against the wall for first class and it did not give me enough room for my feet.  We were basically looking at a wall the whole time.  The last 2 hours or so were hard - turbulence and motion sickness.  By the time we got off the flight we were both in really bad shape.  Thankfully we had a 4+ hours layover so I had great hopes of being able to recover before the next flight.  Yes, and no.  It was a lot of time, but although Daryl was doing so much better, when it came time to board, I was still in bad shape.  We had tried ginger pills, dramamine and drank lots of water, but nothing could calm down our stomachs.  Then I remembered that we had Di-Gize (the Young Living Oil blend for intestinal issues).  This was the ONLY thing that gave us any relief.  So when the boarding began, I was mostly better stomach wise, but I just could not face another flight yet.  At this point we had been on the road for 19 hours with little sleep and that did not help in the least.  As we approached the door of the plane, I just could not go in.  So I waited outside the door praying like mad and applying Peace and Calming and Stress Away and Di-Gize oil blends.  I was on the verge of tears, had tingles going up and down my spine and was having trouble breathing properly - yep, a full on panic attack.  With God's help I was finally able to board the plane (yes, I was the last person to board).  I asked the stewardess if she could make a bag of ice for me to put on my neck and explained about how and why I felt so miserable.  She was very compassionate and got me set up with the ice bag to place on my neck (a recommendation from a friend on Facebook). 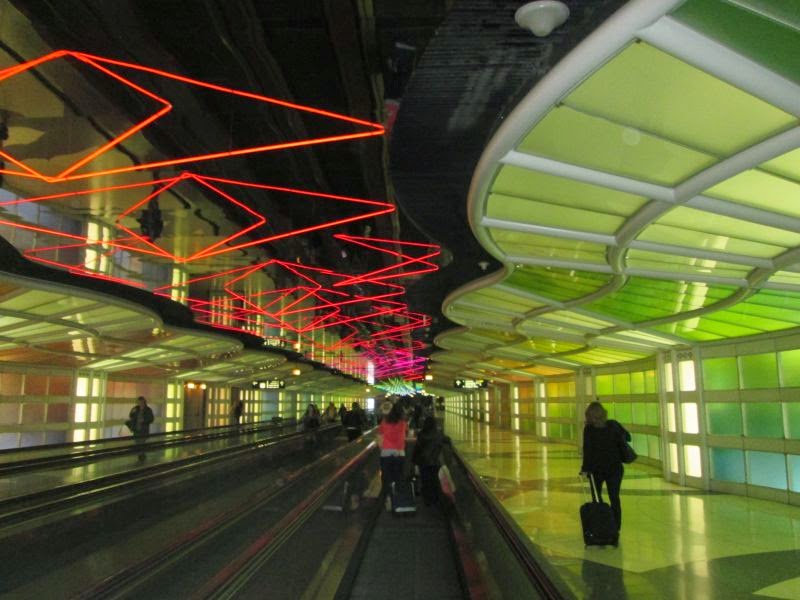 The last flight was beautiful.  I was still feeling miserable, but the flight did not add to my discomfort.  Gradually I was able to calm down and even get a little sleep with the use of my noise cancelling head phone, eye covers and neck roll.  By the time we landed in Sofia, I was feeling almost normal.  God is so good!

We picked up our luggage after going to immigration, and then met our driver (a hotel staff person) who then brought us to our hotel.  We checked in, went straight down for dinner as the restaurant was going close very soon, ate out dinner and then headed to our room to settle in and prepare for bed (it was around 10 pm there).

We both slept relatively well, and were able to be ready on time for our trip to her city.  The Budapest Hotel held our large pieces of luggage and we took only what we'd need for the one night there and what we'd need for Christy on the drive back for Sofia.

We met our new driver, Marty (our attorney's brother), and his cousin, Dani (she was our interpreter), and got everything in the van and headed out.  The drive there was typical for Bulgaria - insane drivers passing when it was too close, too many slow moving vehicles, horse or mule drawn carts, rough roads and all.  We just sat back and took everything as it came.  We did eat a late lunch on the way, and before dinner time we made it to the hotel.

We all settled in for about a hour, and then met to walk around and go for dinner.  We ate at the Happy Bar and Grill and it was as good as I remembered it!  Then we settled in for the night and got some sleep.  Not much, but some. 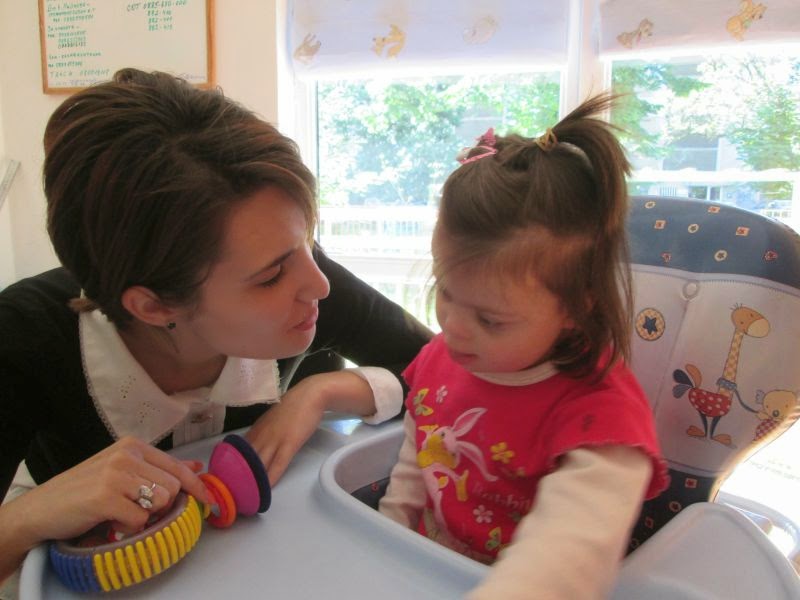 We met our team for breakfast and then headed out for Christy's group home.  In no time, after passing through the now familiar streets, we were pulling up to 'The Pink House'!  We walked into the home and were escorted into a back office where we saw Christy in her high chair!  She immediately got excited and was doing her happy thing!  It seemed as thought she recognized us!  There was a young girl, whom we later found out is called Katerina, next to her that I recognized from our first trip.  There was papers to sign, and lots of talk between Dani and the director, some of which was passed on to us.  I found that Katerina girl spoke English and was able to talk with her about Christy. 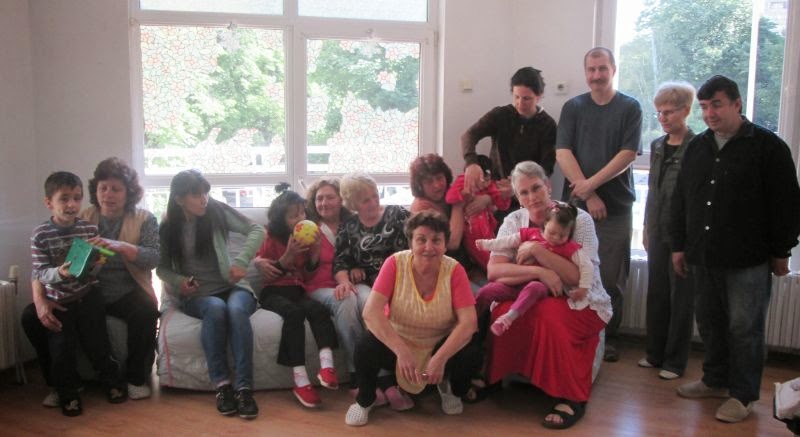 Watching her interact with Christy I could tell that she loved Christy and that Christy loved her.  While there we were given a backpack of things for Christy - clothes, diapers, wipes, a cup, a spoon, a water bottle, a comb and other items so lovingly packed for her.  This was such a surprise!  We were also given the toy and books that we had left for her, as well as a new photo album with photos of Christy while she was living there.  Best of all there was a little file that I will call"The Story of Christy" - it was photos along with her story told as though Christy was telling it herself!  I'll try to include this in another post later! 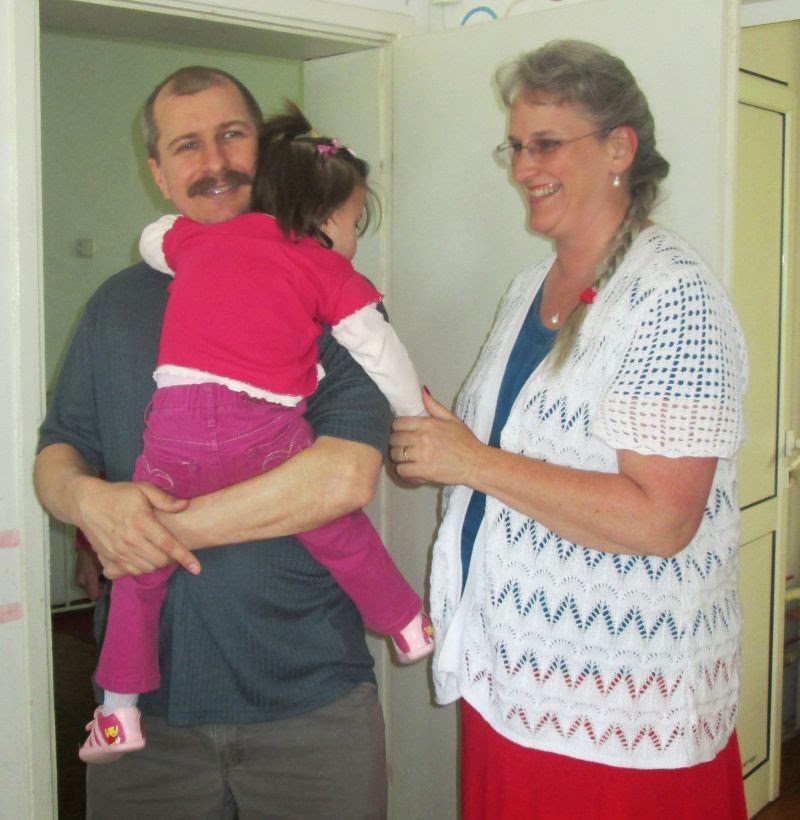 Then we were taken upstairs (we had never gone upstairs!), and taken into a large room where we found two tables set with food and drinks and all the workers from the group home - even those who work other shifts!  It was a going away party for Christy!  I was given a small bouquet of flowers.They each wanted to say goodbye to Christy and she got passed around.  She did not like this and was complaining a lot.  There were many familiar faces there. 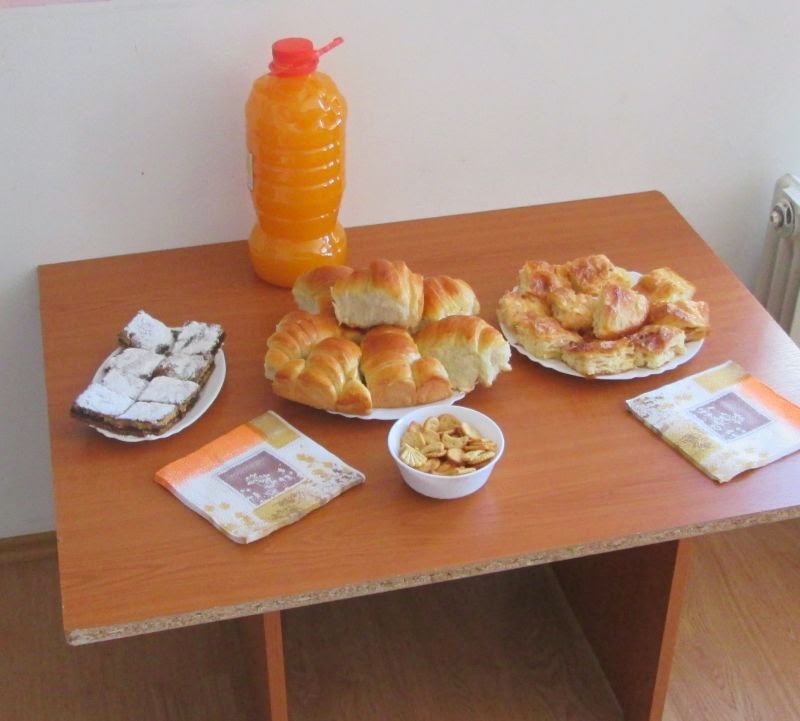 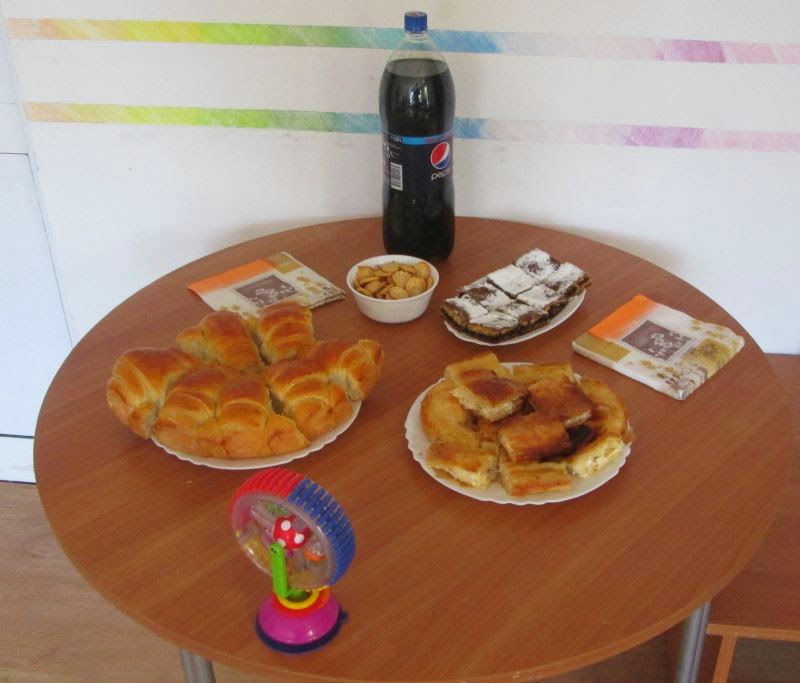 Eventually it was time to go, but before we left, I was able to leave my email address with the Katerina.   As we walked out all the workers followed us, and Katerina was never far from my side, and from photos I saw later I now know that she was holding Christy's hand - it was so very, very sweet!  I almost felt guilty for taking Christy away from these special people who had taken such good care of our daughter....almost.  But I knew this was God's plan for Christy and they would go on to love another child in her place that so desperately needed it! 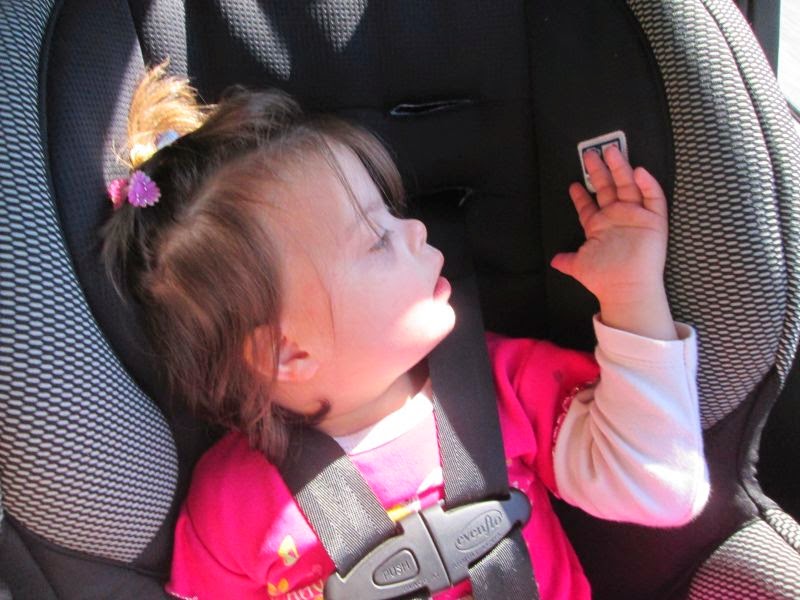 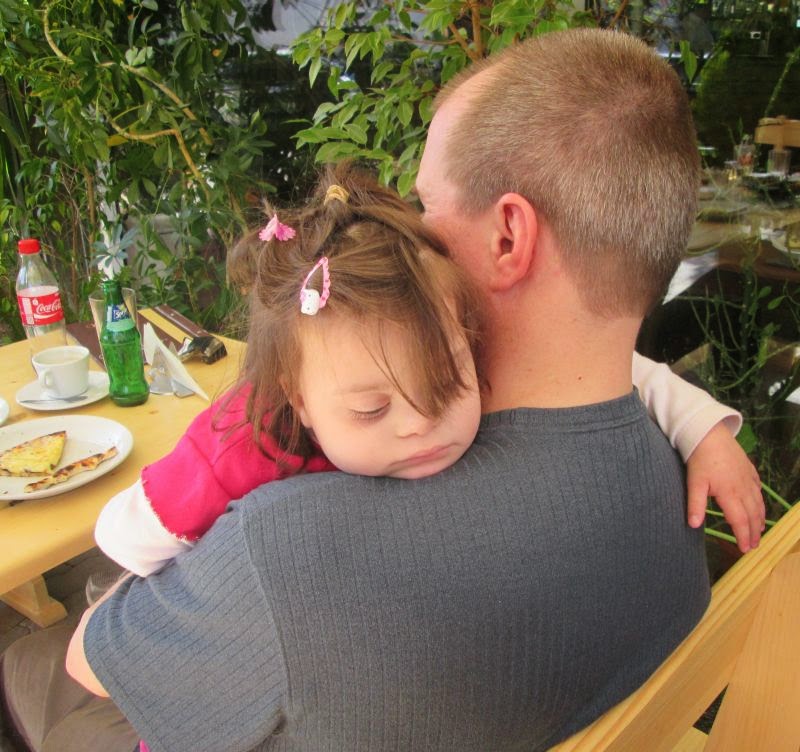 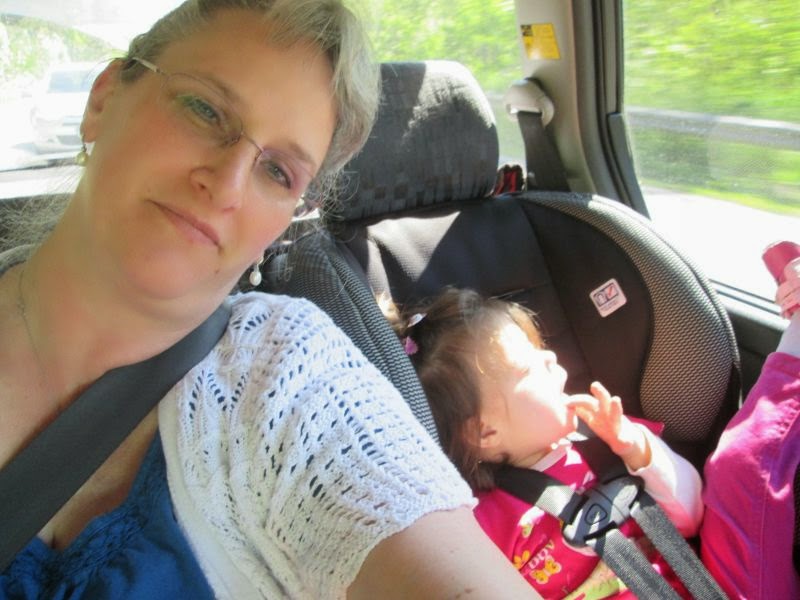 Our drive to Sofia was smooth sailing.  Christy ate the baby food I had brought with no complaints, she traveled amazingly well. We stopped for a late lunch/early dinner and she did well then too.  She even took a nap in the car too.  With Christy to car for, the trip went so much faster than any other one!  We arrived at the hotel around dinner time, so we ate dinner at the hotel restaurant.  Christy did great again and then we headed up to our room to settle in for the night.  We now had a suite that had lots of room, and her bed was already there, as well as a fan.  They also provided us with an electric kettle (great for making instant oatmeal for her breakfasts and our lunches), and a drying wrack for when I washed clothes by hand! 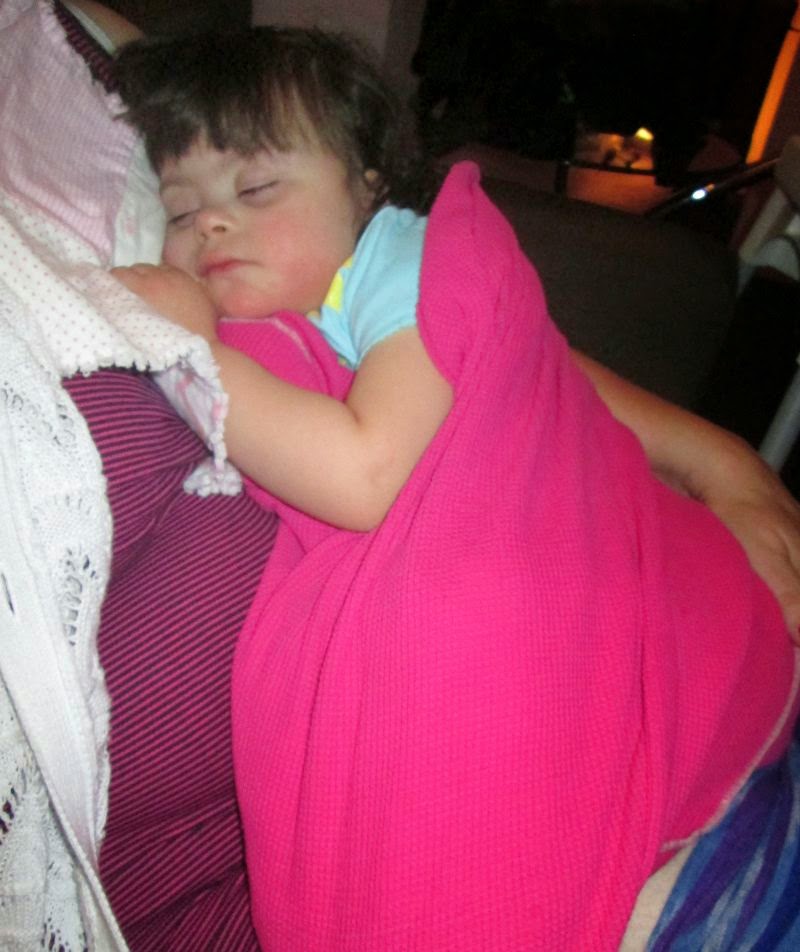 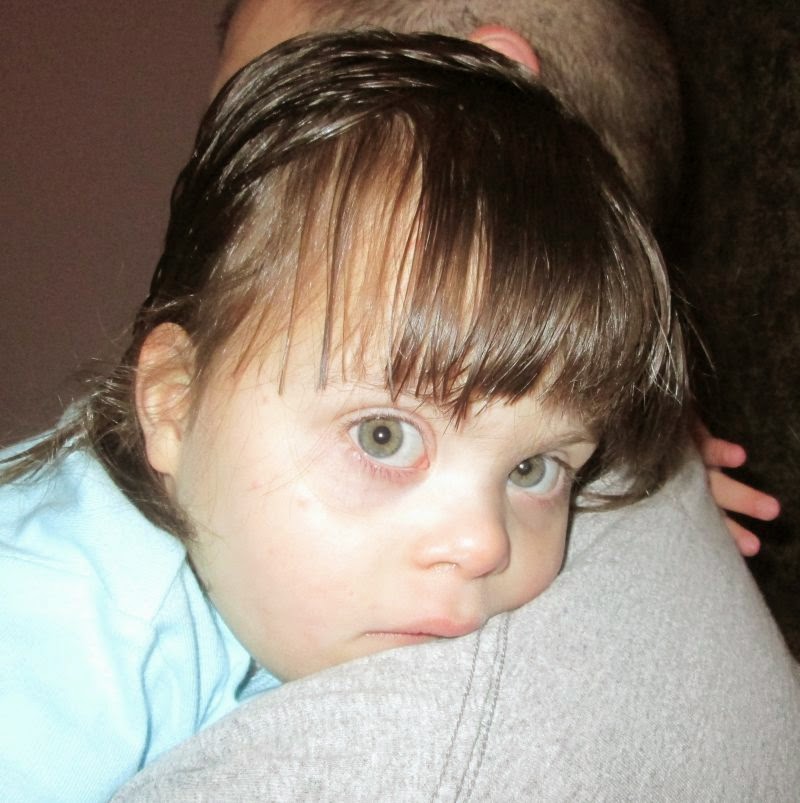 Christy ate well, then I gave her a bath and cut her bangs - they hung down below her eyes!  She love the bath though, and for that I was thankful.  Some orphans have never had a bath and are terrified of it when they are adopted.

I prepared her for bed, wrapped her up in a blanket and gave her  bottle of formula which she took quite well (her suck/swallow is messed up, but I thickened the formula and it went better than expected).  Then I rocked her for a while and she fell asleep in my arms. 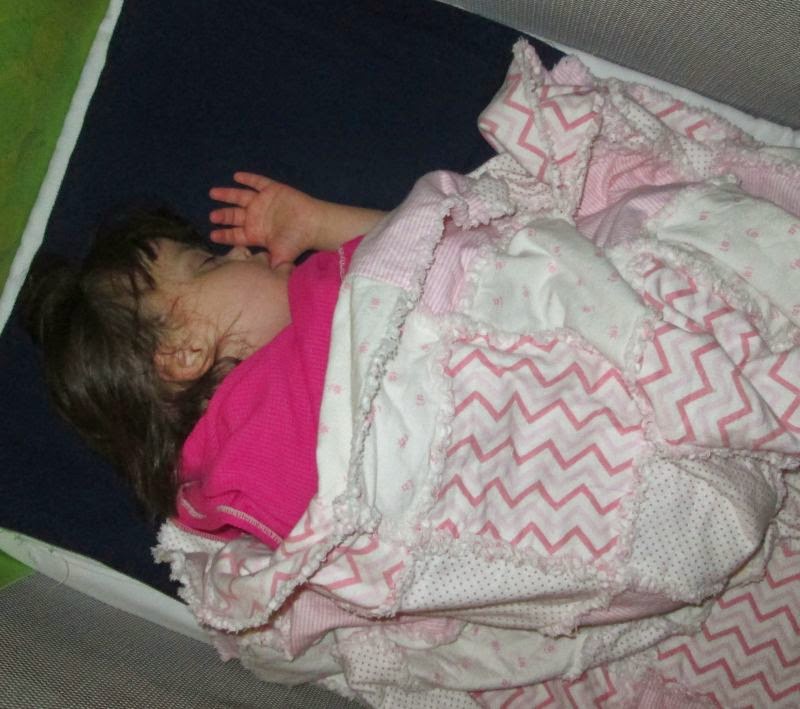 We were so blessed.  Everything about our day went amazingly well. Christy was ours forever and she was such a good little girl!  We all went to sleep and slept as good as can be expected.  Christy slept through the night like an angel!