Christy's first full days with a Mommy and a Daddy!

The day we brought Christy to Sofia (also known as "Gotcha Day") was Wednesday, May 7.  Thursday was the day to have Christy's passport application submitted and her photo taken.  We slept well, and Christy slept through the night - what a wonderful surprise!  In the morning we got dressed and fed Christy in our hotel room, and then went down for the hotel continental breakfast - good as always!  We were staying at The Budapest and they have an excellent restaurant and lots of selection for breakfast and it even varies from day to day which makes it especially nice when you are staying there for 10 days straight!

After breakfast we prepared to meet with our team to go to the passport office.  It wasn't far, but it was faster to go by car.  We basically walked right in, as our attorney's mother was already there doing the paperwork.  We were only there for the photo.  Christy does not like to sit in an open chair, so "set her on the stool" was not an option.  Eventually after much stress and much crying by Christy we got a somewhat decent photo of her with her looking over my shoulder....crying and looking very mad/sad.  Then we were whisked back out to the street and driven to our hotel.
We had made arrangements to meet another family who was in Sofia for their "gotcha trip".  We made the arrangements to meet about halfway between our hotels, in the center of the city, to eat at Happy Bar and Grill.  We ended up walking about a mile to the restaurant, but did not find them there.  Christy was beginning to melt down at this point.  It was really hot, and she was unhappy.  We figured out later that the noise of traffic was something she does not tolerate.  So while trying to talk our friends to our location (tough when neither of you know the city, and the area you are in is a HUGE circle around a cathedral).  Eventually they found us and we went in to eat.  We were so stressed out by this time,, and Christy was just barely settled down, that I totally forgot to take any photos of our trip out, except for this shot of Daryl and Christy at the Lion's Gate Bridge. 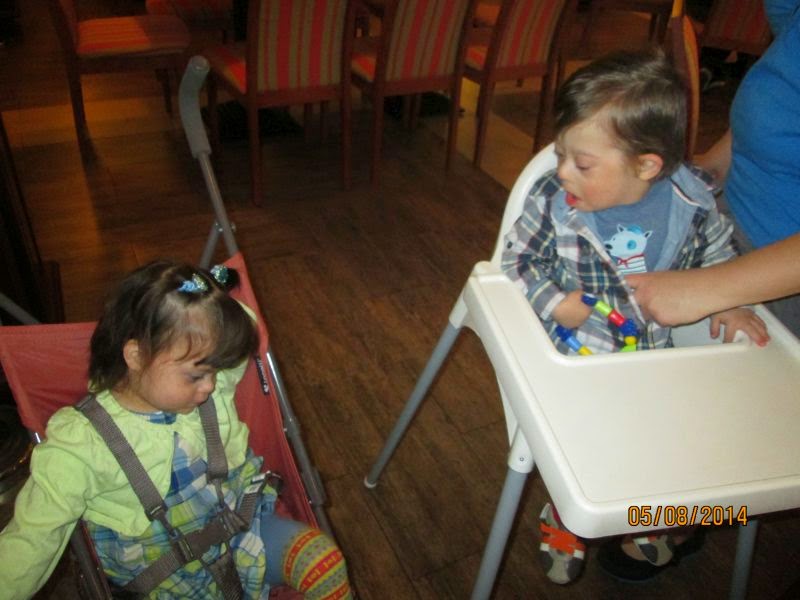 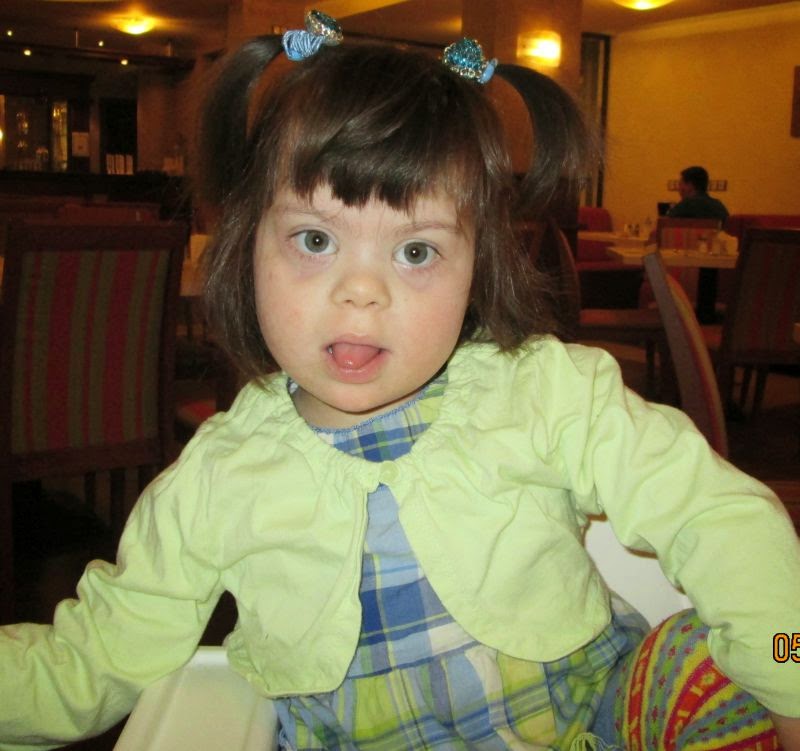 We then headed back to the hotel for a much needed nap.  Then we were able to meet another mom who was on their "gotcha trip" too.  We had it easy and met them for dinner at the hotel.  Christy and Silas didn't pay much attention to each other at dinner, but later when they were playing on the floor in our hotel room, she laughed whenever he made noise or touched her.  It was so cute!  We did find out at dinner that she does NOT like an umbrella stroller.  She basically doesn't like any seat that is open.  She loves her car seat and a highchair, but open seats cause her to go into full panic in seconds. 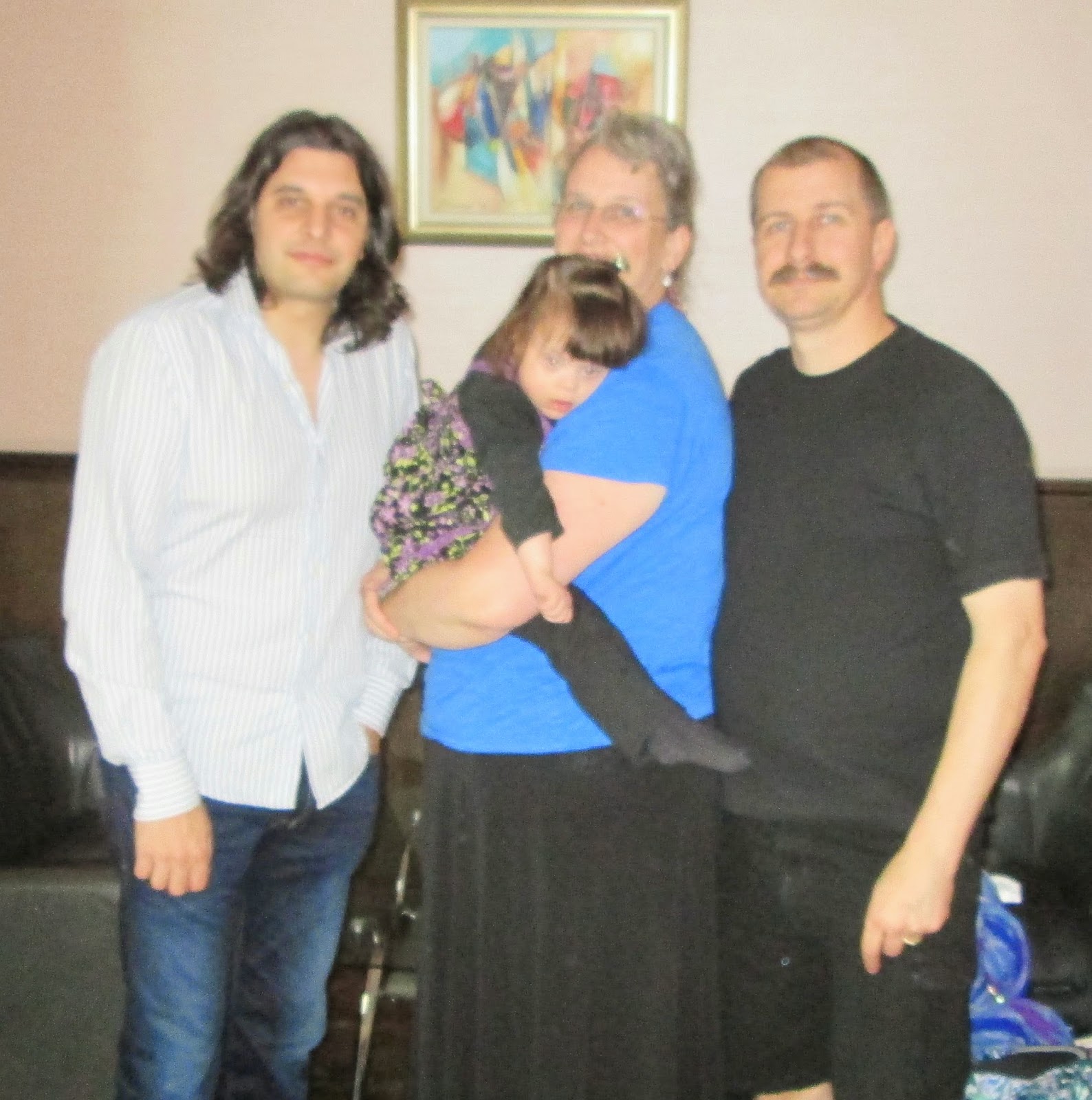 Thursday night was another good night's sleep.  I can not express how thankful we were that she slept so well at night - we were both still suffering from jet lag in a big way.  We did not have anything planned for Friday, so we pretty much just hung out in our hotel room.  We had plans to meet with Yavor, our interpreter from our first trip.  He drove us to Leo's Pizza - a true Italian restaurant.  I ordered the wood fired pizza, and Daryl ordered a pasta dish.  The food was excellent, and so was the company.  All too soon it was time to go back to the hotel.  We said "goodbye" to Yavor and thanked him for making our first trip so memorable.  Then it was time to tuck Christy in bed and go to sleep ourselves.


+
As we were lying there in the dark Friday night (she just would not go to sleep when I rocked her, so I placed her in the crib, hoping she'd settle down and sleep), she started giggling!  Let me tell you that sleep is impossible when someone in the room is giggling!  Especially Christy's giggles - they are adorable cute!  So, like a good mom, I got up and videotaped her giggles in the dark - it was just too cute to ignore.  She eventually quieted down and went to sleep, but she giggled on and off for over an hour!