Charis, pronounced "Khar-ees" is a Greek word found in the New Testament and is often translated as "Grace," "Graceful," "Gift of God" or "Gracious Gift."  It's definition as found in the Strong's Exhaustive Concordance is "The divine influence on the heart as manifested in the life."  This is where we got the name for our little baby girl, Carese.  She is the physical manifestation of God's influence in our lives.  The faith that He has granted us to trust Him.  To put our lives on the line and follow His leading where ever that may take us.  Do we ever doubt, struggle or fall?  Yes.  But He's always there to pick us up, dust off the dirt and forgive us.  When we trust Him whole heartedly, He give us gifts that we would never dream would be so good for us.  Sometimes those gifts are things we would naturally, unknowingly avoid.  Others we fear.  But God is always good, in every thing and in every way.  He has proven this in our lives through the conception, pregnancy and birth of Carese.  Let me share with you how God worked to bring her into this world.

At our church camp out last week, there was the sharing time that happens every year on Saturday night.  I began to think through my last year since that event last year and my heart was full.

You see, last year at that event my husband shared that we were expecting our 12th blessing.  We had no idea what the future held.  I was already experiencing some unusual pregnancy problems, like accelerated heart rate/dizziness.  We had no idea how the next year would go. 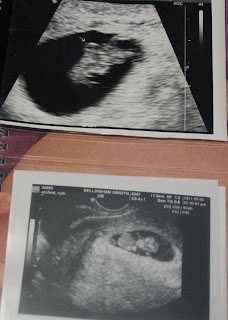 The first hurdle was making it thought the first trimester without experiencing a miscarriage.  I experienced spotting on almost a daily basis, along with the feeling of being very fragile - like going up and down stairs might cause me to miscarry was the kind of feeling I was having. After some early blood work, the OB (who I hadn't even met with yet) prescribed progesterone suppositories for me and the feeling of fragility went away as did the spotting.

I got to meet the OB at 9 weeks, and had an ultrasound that showed Carese's little heart beating away.  The OB was surprised that I had conceived at my age (then 47), and even asked if we had been using fertility treatments!  She said something about it being amazing that I had conceived so late in life!  She was not terribly optimistic though, as she said she wanted me in for another ultrasound in 4 weeks to confirm if the pregnancy was still viable.

She also discussed with me that it was very likely that this baby would also have Down Syndrome since I had already had a child with Trisomy 21.  According to statistics, 1 in 100 babies born to mothers who have conceived a child with T21 who are of advance maternal age (AMA).  For the rest of the population of mothers conceiving, it'a 1 in 1000 births, and for women over 40 it drops to 1 in 100, over 45 1 in 30.  So that means that it was probably 1 in 3 that this baby would have T21.  She encouraged us to have testing done, but we refused.  I shared with my daughter's pediatrician "What's so scary about this" while I pointed to our daughter Ester: 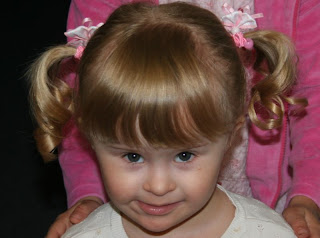 I did agree that the health issues with a child with T21 can be difficult to deal with, but that I would welcome another child with T21.  Esther is the best nature baby/toddler/child we've had yet!  We did decide that it would be a good idea to get a good look at this baby's heart to rule out a heart defect, but that was much later in the pregnancy.

The next 11 weeks went fine - I was feeling tired, but that was about it.  I did have some problems with feeling my heart beat throughout my upper body/head when lying down at night, but didn't think much about it.

Starting at the end of October I came down with a bad cold.  After 2 weeks I shared with a friend that I was so done with being sick, that I wanted to be active again, but that I felt that God was giving me some kind of message about slowing down and taking it easy...I had no idea!

At my 20 week appointment, we had the next ultrasound and also found out that we were having a girl.  They were concerned about my BP so they asked me to come in again in 2 weeks.  I did, and in the meantime I was still sick (1 month after my comment to my friend).  I was also having stomach problems that I thought might be the beginnings of an ulcer.  The OB I saw that day poo-pooed the idea.

One week later, I was working at the computer when I felt like I was going to pass out, which I did right after calling my daughter to get her help.  After being taken to the hospital in an ambulance, they determined that my sinus infection had moved into my ears and caused me to be dizzy, adding to that my stomach ulcer, I passed out.  I was told to go home and not do anything that would cause me to get dizzy again - no computer/movies/reading....nothing that causes the eyes to move rapidly!  That's some pretty strict limitations.  After getting on antibiotics and stuff, I was off those restrictions in about 2 weeks.

The following month, just after having those restrictions lifted, they determined that my BP was significant and sent me to a specialist at the University of Washington.  I was told there that I had high cardiac output and high blood pressure.  These two indicated that it was likely that I would develop Preclampsia, a potentially fatal pregnancy complication.  I was put on strict limitations - I was not allowed to do anything that would elevate my heart rate!

We also had a fetal echocardiogram to check for any heart defects, and these was something there.  The cardiologist, whom we had worked with at Seattle Children's Hospital when Esther was there for her heart surgery, saw something that could be either nothing or a small VSD.  But she said that is was so small that the worst would be that she would have a heart murmur.

So, it was amazing/miraculous that I got pregnant, miraculous that I didn't miscarry, amazing that she had no heart defect, and now it would be miraculous if the pregnancy would not be ended early (via induction) due to pre-eclampsia!  We also possibly faced having to deliver at the U of W!

Well, I was a good girl, and the meds they gave me worked.  I had to change a lot of things with the kids chores and such to basically do nothing for the next 4 months, but we made it work.  Everything continued to go fine, seeing the specialist once a month and the OB every 2 weeks until we hit the last 6 weeks.  Then I had to go in every week for non-stress tests and ultrasounds as now we face possibly placental compromise (common in pregnancies with chronic high blood pressure).

At 36 weeks, Carese started showing sign of distress, so an induction was planned.  They told us about the potential of her needing to stay in the special care nursery for up to a week or so due to coming early, but that was better than her staying put and getting weaker.

It took a few days to get into the hospital, and then a 2 day attempt at induction, going home for one night, and then things started to progress during the second attempt (but not until after another 36 hours).  I wasn't in labor, just mild infrequent contractions on pitocin.  They broke my water and everything was fine for a couple of hours.  Then I had a gush of fluid and after that her heart rate would decellerate during and after every contraction.  The checked and found that her cord had gotten trapped between her head and my cervix.  This is not something that happens often, but when it does it's life threatening. 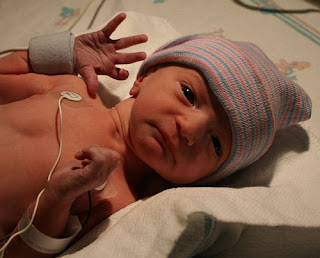 They called "code purple" and in about 5 minutes I was being wheeled down the hallway to the OR.  Five minutes later (5 of the most difficult minutes of my life), they came and told Daryl and our daughters that Carese was born and doing fine! 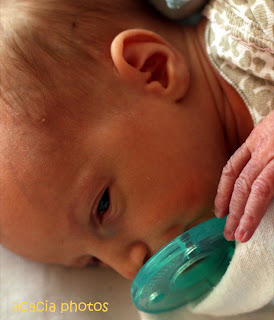 She only weighed 4 pounds 14 oz, but she was a fighter.  She had great apgar scores and was held by everyone while they were waiting for me to wake up!  She was very serious about eating, as she had no baby fat whatsoever.  She was so incredibly perfect, but so incredibly tiny! 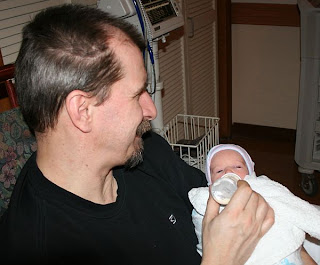 I've heard moms lament about not being with their baby for that precious bonding time, but I did not experience any such problems.  I knew she was mine, all mine, sent straight from the hand of my Father.  A precious gift to confound the specialists and fact finders and statistics.

She did not have Down Syndrome, she did not have any heart defect whatsoever, and she did not spend weeks in the special care nursery.  I would have loved her the same if she had come to us with all of the above, but I was amazed that God would do this to confound the experts.

Throughout the pregnancy, my dear husband, Daryl, prayed for three things - the easiest labor yet (got that as I never got into labor), Carese would be perfect and that I would be an example, encouragement and inspiration to other women.  God granted all his requests.  I tease Darryl that he should have prayed for an easy delivery, but even there God knew best as now I can relate to other women who have experienced emergency C-Sections.

So, my time of being "on the shelf" was far from over back in October when I was tired of being unable to do much.  In fact, just when I started to recover from my emergency C-Section, I twisted my knee and ended up dealing with  crutches and such for 4 months.  I am now, a year and a month after discovering that I was pregnant, finally back on my feet and able to start doing normal activities with my family.  I have learned much, especially to appreciate the little things like being able to carry my sweet Esther, or making dinner for my family, or actually walking into church holding my precious miracle baby. 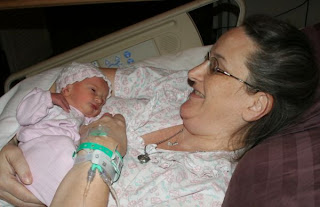 I couldn't imagine going through a pregnancy at my age before I did.  I would not have thought I was strong enough.  But God knew that I could with the grace that He alone could give me.

With God all things are possible.  God can do anything, anytime, anywhere.  Statistics only show us how God has chosen to act in the past, and are no indication of how He is working or will work in the future.

We are so thankful!  And I think she is too: 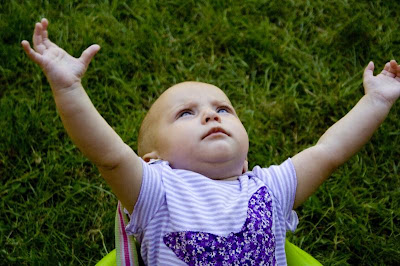