I have had very little time for the computer as we have been so busy!  Busy is great though - I'm so thankful to be active again.  I've been off crutches for over 6 weeks now and every week I'm getting stronger!  I was even able to walk through Woodland Park Zoo with out any knee pain 2 weeks ago - that was 5 hours of walking!

Here are some highlights of our last month:

We decided one morning late in August that it would be fun to take a trip to the Woodland Park Zoo, but if we waited a week it would be exceptionally busy due to the Labor Day Weekend, so we decided to go that day, and within an hour we were packed and waiting for Daryl to come home from work. 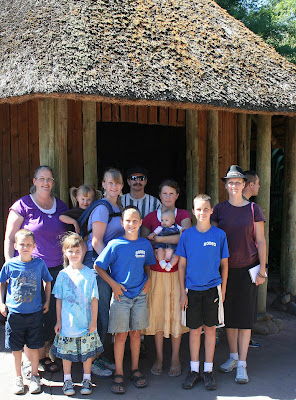 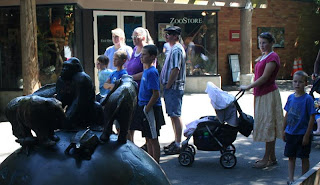 We left at noon and got there at 2:30.  At first we couldn't find a parking place in any of the parking lots, and due to my knee and Daryl suffering from Plantar Fasciitis, we wanted to park close.  So after going through all of the parking lots, I said to the kids, "Let's all pray for a parking spot.  Let's pray for a really good spot close to the entrance and that will be in the shade when we leave."  One of the kids said, "Can we ask for that?" and I assured him that we can!  I then prayed that God would build their faith through answered prayers!  As we turned in the main parking lot, I went for the gusto - drove right to the entrance, and low and behold, a family was just getting into their car...at the VERY FIRST PARKING SPOT, closest to the entrance!  Praise God!  But the best was yet to come - when we left, our van was indeed in the shade! 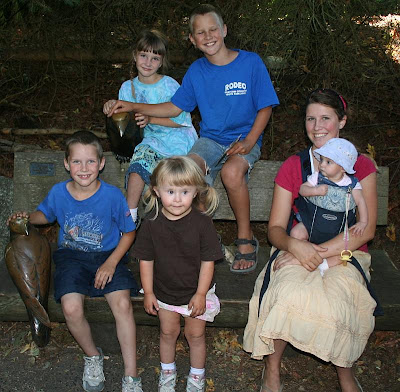 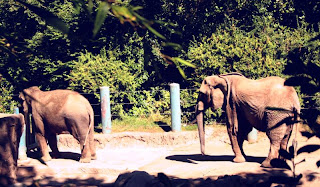 We had a wonderful time at the park - the kids behaved beautifully, no whining, no "I'm tired" and no"I'm hungry" heard the whole day (I did pack portable snacks and water, so that helped!).  We left the park just minutes before it closed, but we had seen everything that we had wanted to see and were more than ready to go home, tired feet and all. 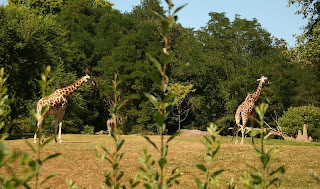 We saw some amazing animals and many of them up close.  We even got to see the elephants get their hose down and play with the game keeper and his hose!


The giraffes were amazing, and we got to watch one walk - incredible movement in such a tall animal!  And behind the giraffes were ostriches and zebras, but I couldn't get a good picture of those! 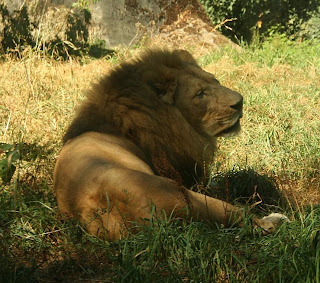 the lions were so awesome - this male was amazing to see so close up! 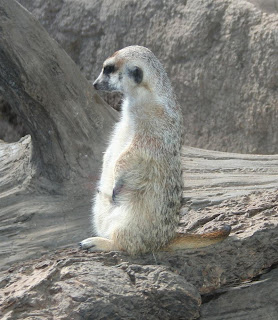 We watched some episodes of "Meercat Manor" last year, so it was fun to see them in real life.  They are much better fed at the zoo, however, and were actually really cute! 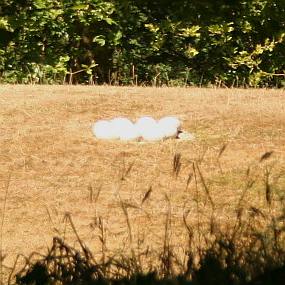 We even got to see a real Ostrich Nest!  Boy those eggs are big - I think they'd even feed out entire family for a meal with just one egg! 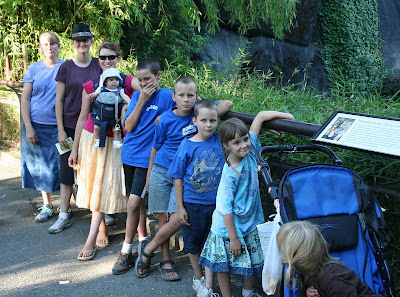 Late in the day, we found some of the old cages that I remember from my childhood days, only they were empty and there were signs explaining the all the tigers had passed away and they were working on making a new habitat for them before they get anymore.  Then I suddenly recognized the fence as one that Daryl's siblings had lined up on for a now infamous family photo - they all looked like mafia or something like that.  So we decided to try and replicate that.  Only we had one serious problem....even though we were tired and hungry (we had a snack right after the photo), the kids just couldn't stop smiling! 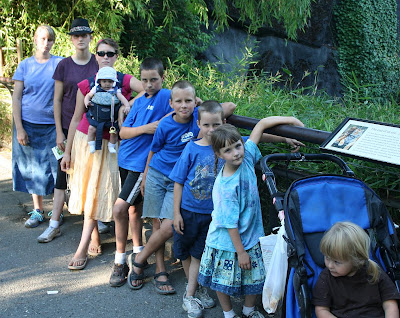 The essence of the old photo was no smiles, not one - and we wanted to do this photo as a hats off to the original.   So this first photo is one of the epic fails...we had some great laughs as they all did their best to not smile, and failed miserably!

This second is the best we got.  I regret that I didn't notice that Jessica was in the light, but I might try to photoshop that one day!  Here's the original we were trying to recreate:

Anyway, we had a wonderful time.  The highlight was the otters - they were playing with Esther through the glass!  They would swim away and hide and them come back and surprise her! 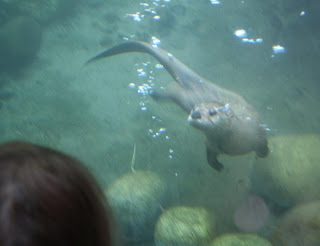 And she was also very entertained by the penguins later.  Their antics are always so entertaining!

fter the Zoo, we picked up dinner at a local Safeway and I showed the kids where I took my driving test, and signaled to turn left and went straight.  Also where Pizza and Pipes used to be.  We eventually found the freeway again (roads closed, on-ramps under construction and such).  Daryl and I were marveling at how well the day had gone and how well behaved the children had been. 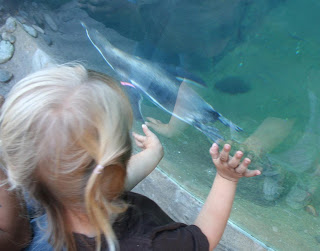 We decided that a stop at Dairy Queen in Marysville was most decidedly called for.  We acquired out cones/blizzards and were heading out when we found that we only had first gear.  Uh Oh.  We stopped in at Jack in the Box (Daryl's new favorite place to get milk shakes), and we talked to kids about praying for the van's transmission.  We drove around the block, and still just first gear.  We stopped and shut off the engine and asked the kids to pray once more....we left and tried again...and then the tranny went "Ka-Chunk" into second gear, and then into third.  We turned around and headed for the freeway!  We held our breath until each gear change!  But it worked and we made it home, safe and sound!  I was so thrilled that God had answered our prayers yet again!  What an amazing journey of faith for our children.  Sadly, our van is now parked until we can afford a new/rebuilt transmission for it.  Thankfully our truck is still running well! 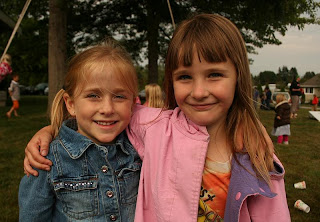 The very next day was our church's annual picnic.  We had a great time, but I only got around to taking a couple of photos - this is Elizabeth's best friend Ruby! 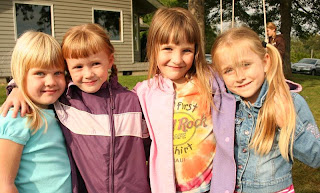 And here's Elizabeth with a few other church friends! 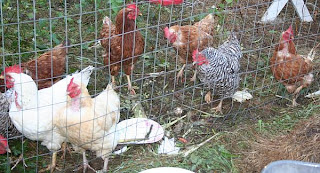 And now for our latest adventure!  We have chickens again!  Last Friday morning, I asked the kids if they would be interested in getting layers again (the last time was over 8 years ago!).  By noon we had talked to Daryl and had decided that it was time to try it again (we have recently watched Food Inc, a movie about our food industry).  I put a notice on FB about layers, and by that night these beauties were in out newly re-modeled, former coop turned playhouse turned coop! 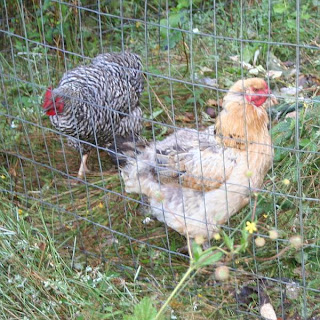 We had "farm fresh" eggs the next day!  One of my good friend's has a new batch of layers starting to lay and they wanted to find a newhome for last year's models, so for a little cash, we found ourselves the new owners of these little ladies!  We now have 5 Rhode Island Reds, 3 Barred Rocks, 2 White Leg Horns, 2 Aracanas and 1 Orpington Buff!  When we used to have layers, I loved to have different breeds for both the look of the chickens and the colors of their eggs!  So far we've gotten brown, green/blue and white!  And someone contacted me yesterday and they want to give us 4 Americanas and a mobile coop as well as 40 pounds of feed! We'll be picking up those on Thursday.  We have also ordered 25 Red Ranger Broilers that we will be raising for meat.    God is just blessing our socks off around here!
And counting blessings, we joined a gleaners groups this summer and have been so blessed with all the produce we get there.  I have been canning and freezing and dehydrating!  I haven't done that in over 8 years now (since my business took off), and it's so great to be able to teach the younger ones to help with this important job of putting up food for the winter!  So far we have 28 quarts of plums and peaches canned, 5 gallons of beans frozen, 3 gallons of tomato sauce frozen, plum and apple sauce frozen (great baby food), and tons of bananas frozen and ready to make wonderful smoothies.  We also have strawberries, blueberries and raspberries in the freezer too! I also contacted our local butcher and have ordered a 1/4 grass fed beef to split  with a friend of mine - we'll be eating better than ever this winter! I've been making good use of Daryl's overtime, so when he's working normal hours again we won't be to strapped for groceries - we'll shop in our own garage!
This past weekend we got to visit with Daryl's twin brother, and Carese thought he was just fine!  She even showed off and sat up all by herself for a good long time!  Carese is lighting up our lives with laughter, squeals and fun antics these days.  She's just over 14 pounds now and so healthy!

We are about to start school around here, but need to finish up a few projects in order to have the school room prepared and all our harvest preserved.  I wish we could start right now, but I just can't yet - the computers aren't talking to each other!  Daryl will be fixing that soon and then I can get their school set up.


I'm hoping to blog more regularly soon, but I can't guarantee it!  I hope you are having a wonderful fall too!