We have been very busy around here with preparations for completing our home study!  But first, in case you missed it, we have officially announced which little girl we are adopting!

Do you see her in this photo?  I know, I did a terrible job, but I tried! 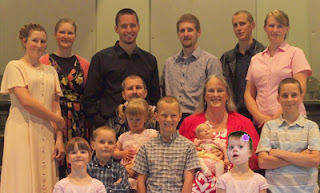 Anyway, here's a better picture of our Priscilla (that's not her real name, but it's the name assigned to her by Reece's Rainbow - we plan to give her a new first name and use her real name as a middle name). 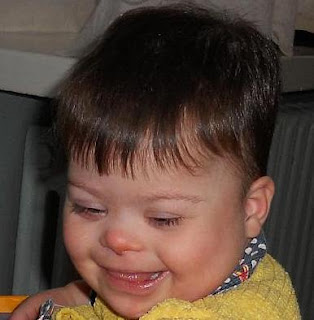 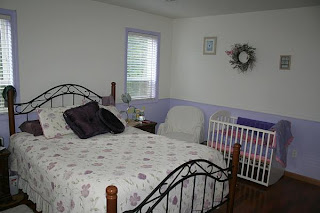 Priscilla is 2 1/2 years old, she is tiny for her age.  She has had her congenital heart defect repaired, but has suffered 4 bouts with Pneumonia already.  She looks healthy, but in videos you can hear that her breathing is junky like Esther's was before we started thickening her liquids.  She also have extreme laxivity of joints/flexibility and will benefit from the use of the hip huggers like we used with Esther. 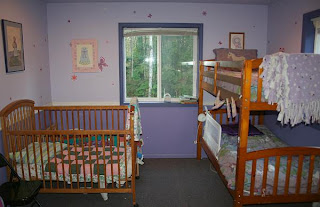 We have been getting ready for our first home study inspection, but preparations stalled last week and this week due to the invasion of the flu - the real flu....respiratory and digestive, YUCK!

Here's what the two rooms I finished look like.  The first photo shows our bedroom and the crib that Carese sleeps in.  Eventually this crib will be moved into the girl's bedroom, but probably not for a few months yet.  The second photo shows the girl's sleeping arrangement.  Elizabeth sleeps in the top bunk, Esther in the lower bunk.  The crib will be for Priscilla, but she also has the option of the toddler bed that is behind the crib.  Right now we are installing Carbon Monoxide detectors and a smoke detector and I hope to tackle the boys bedroom with them today/tomorrow.  Then we'll be doing a thorough cleaning of the bathrooms, oh joy! 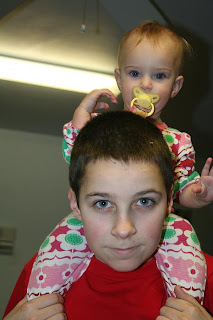 Carese is in full walking mode now - crawling only over rough terrain!  She's so little it's adorable watching her walk around!  She loves to play with her siblings, but for some strange reason she is a super momma's girl - I guess I must be doing something right.  In our studying for the adoption I have learned that babies and toddlers form attachment to the people who consistently meet their needs.  So, contrary to popular beliefs about large families, I do the majority of her care, hence the strong attachment to me!

Reuben has such a good heart.  He dotes on Esther and Carese more than any other of my boys.  You can tell too, as Esther is very bonded to him and will generally go sit by him or ask him for a piggy back ride. 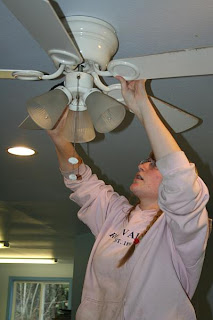 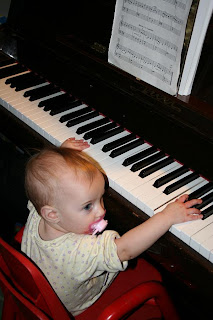 Jonathan is working full time, so we don't see him much.  I love that this new coat from the company he works for (Perry Pallet) is glow in the dark!  You know I love the piano and most of our children have taken at least some piano lessons, well, one of my favorite things to do with the babies is sit them up to the piano in their highchair or whatever and let them bang away.  Carese is not exception and she loves to play!

Recently we invited a very special family over - the family of the girl that Jeremy is courting.  Yes, that's right, our first child to officially court!  Not, that's not dating, but if you want to think of it that way, it's dating with a purpose.  But it doesn't include just the two of them spending the evening all alone.  So we invited her family over for dinner and some games.  We used the incentive to do some early spring cleaning, like Jessica cleaning the ceiling fan!

Can you believe it, as of next month, we will have been living in our new home for 5 years?????  I just can't believe it!  Time has just flown!  In 5 years with our busy family things can get pretty dirty, especially in the vicinity of the kitchen.  A scrubbing of the cupboards made for so much improvement, especially after canning this year!  I hope to break out the paint soon and do some touch up painting, especially in the diningroom and kitchen! I wanted to do that last year, but Carese's arrival got in the way!