Having a new baby in the house never gets old!  They are so precious, helpless and snuggable!  Carese is getting fairly spoiled (she has yet to sleep in her new bassinet!), but in my opinion you can't spoil a newborn!  There's plenty of time later to have them sleep by themselves and hang out playing by themselves!

One of the biggest problems in a large family when a new baby arrives is getting access to the aforementioned baby!  Everybody wants to hold the baby!  This time around all the girls love holding her, which was to be expected, but the boys love to hold her as well.  I have decided that I need a "Take A Number" thingy in order to keep straight who gets to hold her next!
Here are some photos of some of the resident baby holders:


We are just now beginning to find a new normal.  My recovery has been slow and was complicated by my injuring my knee just getting into our truck.  The doctor said the I was able to injure my knee with so little trauma due to the hormones still in my body from pregnancy making my joints loose.  They believe I have torn my ACL, but we won't know for sure until I have an MRI. We are waiting for insurance to approve the MRI, and I am going to physical therapy twice a week for now.  Just when I was beginning to want to do things around the house, I'm back to being nearly useless.  God is working on me this year - and on our family - He's basically put me on the shelf and teaching me to find my sufficiency and value in Him and not in what I can accomplish every day! 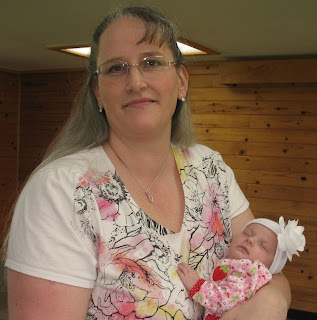 A few weeks ago I was able to attend our local Great Cloth Diaper Change as a sponsor and participant!  I changed Carese's diaper and Jessica had Esther.  So we participated in setting another world record!  A fellow participant took this photo of me there and sent it to me - not too bad for 4 weeks post partum and 10 days after injuring my knee!


Having a baby that is 3 weeks early and small for gestational age has it's challenges.  She started out at 4 pounds 14 oz, and had nothing to lose - literally skin and muscles, but not an ounce of fat.  She could not afford to lose any weight, so we had to use formula while I attempted to get her to latch and pumped to bring in my milk supply.  Since she was so tiny, her mouth was also tiny, so she just couldn't latch, even with a nursing shield.  So we fed her my milk and formula via a bottle for the first four weeks.

By then she was able to nurse using the nipple shield, and she had gained enough weight that we could push things and we stopped allowing a bottle for a week.  She started out that week at 7 lbs 5 oz.  and ended the week at 7 lbs 1 oz.  But then she turned a corner and started gaining slowly. I had also started adding a small amount to each feeding using a finger feeding technique that uses a tube to get the milk into the baby's mouth while they suck on your finger.  After a week of that we were able to reintroduce the bottle for the extra feedings.  I had enough milk, she just tuckered out at breast feeding before she was getting enough milk to gain weight.

She gained slowly at first but she was starting to sport a double chin by then as seen in this photo! (7 bs 5 oz at 6 wks), but then at 6 weeks she started gaining quickly and at 7 1/2 weeks was up to 8 pounds 1 oz!   She is eating more at each feeding and has been able to nurse with out the shield for 4 days now.

She has not only grown in weight, but she has grown in length!  She measured 18 3/4 inches at birth and now measures 21 inches!  She's grown out of her preemie clothes and is now wearing NB, but a few of the sleepers are getting too short!

Here are two  photos of her in her "coming home" Carter's preemie size outfit when she was 5 days old, and now - she's grown a lot, but she's still tiny for an almost 2 month old:

Here she is all snuggled in her newborn cocoon - my dear friend, Ruth D (see the Doyle blog in my blog roll) knitted this while I was pregnant, but when she was born, we knew she wouldn't fit in it, so she quickly made a smaller one (as seen in the photo above where Elizabeth is holding Carese).  Now she has outgrown the preemie size one and fits nicely in this one!


Above, you can see Esther growing into a big girl - sleeping in a big bed and playing outside with her brothers.  She loves to play outside!  She's talking more, putting on her own coat, running pretty fast, doing small steps without help!  She's also loving being a big sister and sings to Carese as well as petting her and asking to hold her too!