So much has happened since the girls got home from the hospital that I can't possibly do it justice in one post, and I won't go into details (it's all a blur now anyway!).  Here are photos and some descriptions of the insanity that was our merry life from Thanksgiving to just before Christmas! 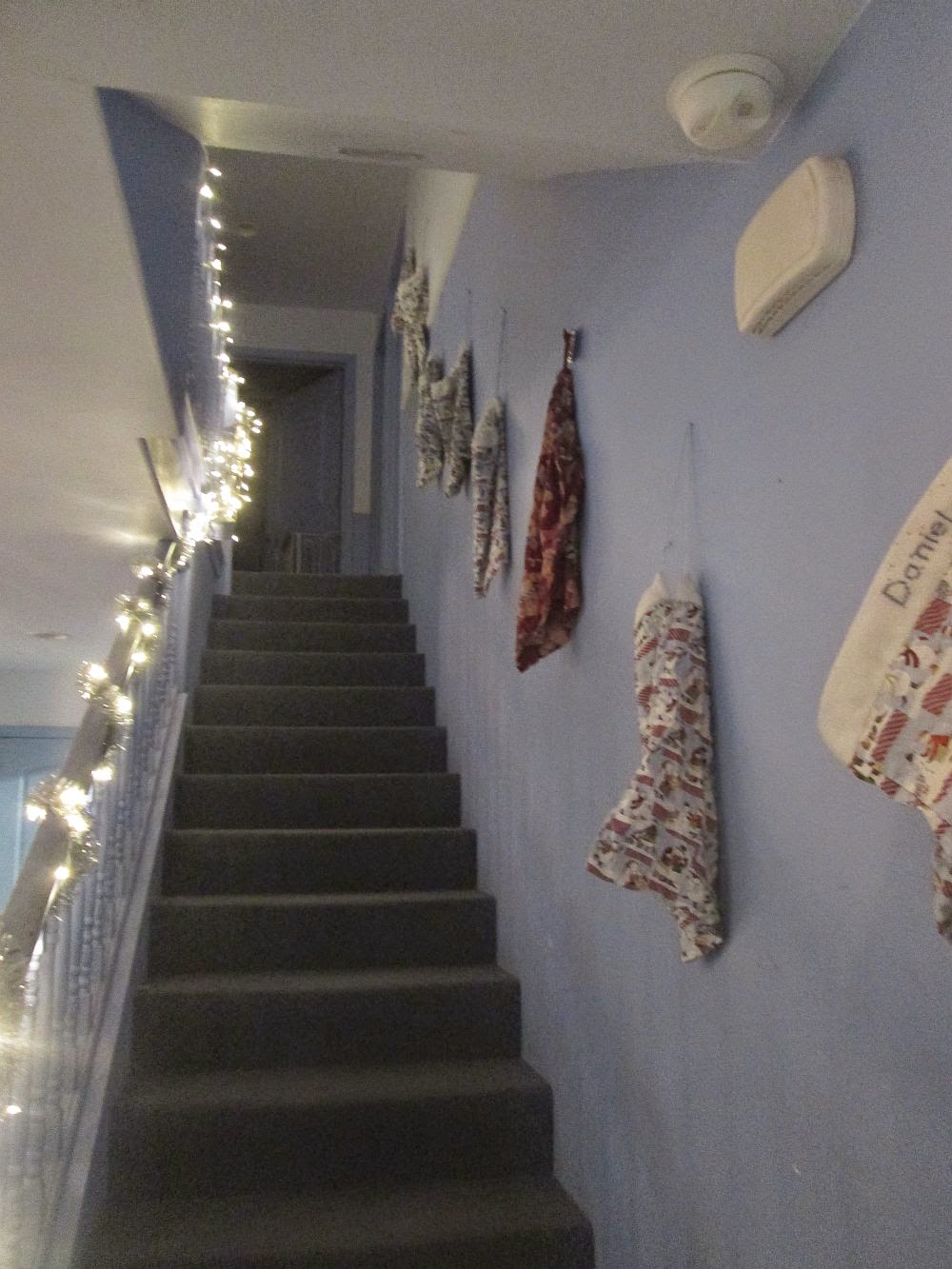 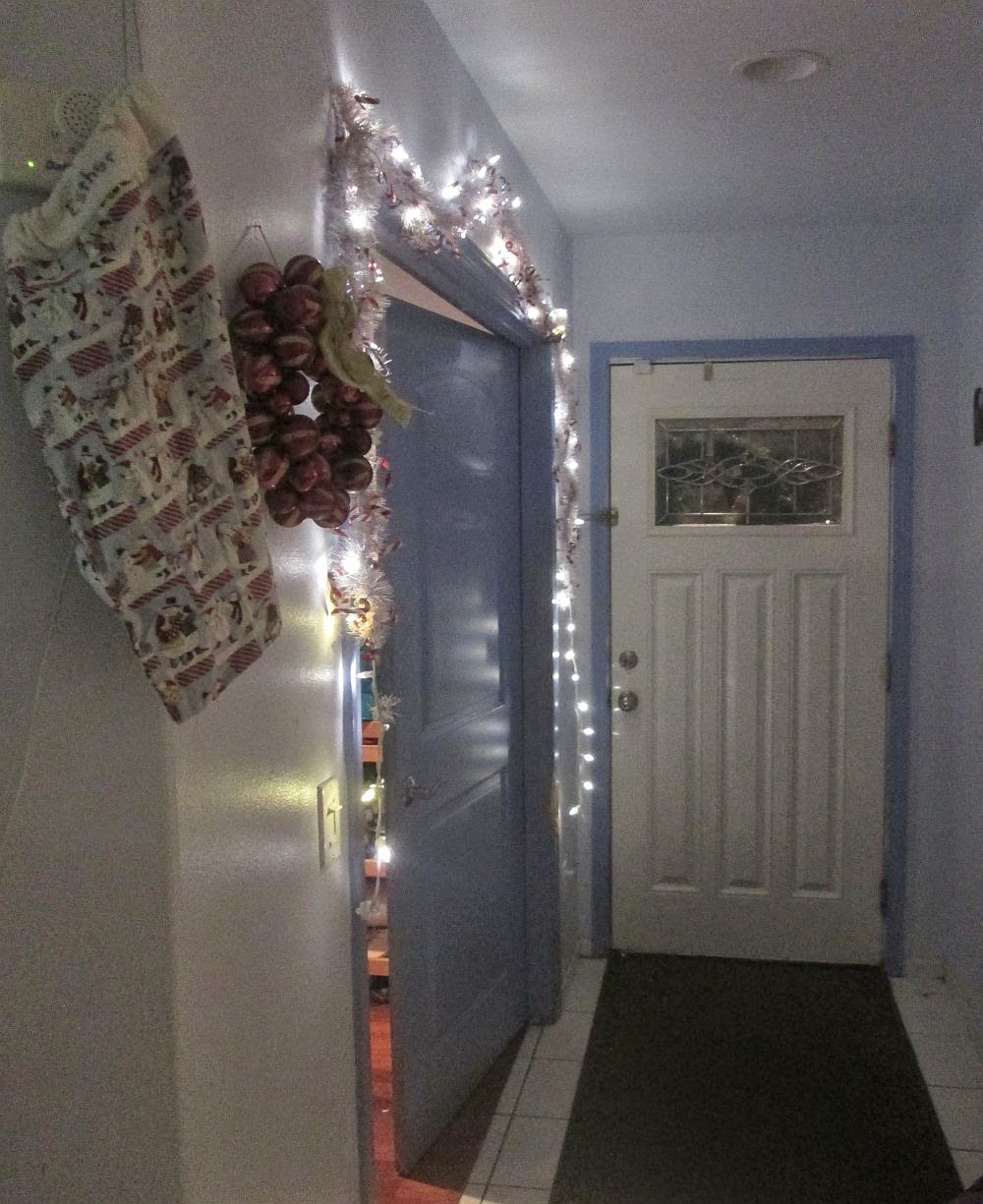 First of all there was Thanksgiving but I have no photos.  But we were very thankful indeed as two of my dear friends and their mother came around noon to deliver a complete Thanksgiving dinner for all of us!  I was still swamped with medication schedules and getting up all night to do breathing treatments.  I had threatened that Thanksgiving might just be chicken nuggets and tatortots!  But we had a wonderful, homemade turkey dinner with all our favorite dishes!

Soon it was the Christmas season, but we were in the thick of wedding preparations.  It was the second week of December before there was any "it's beginning to look a lot like Christmas" going on in our home, But little by little we got our act together.  We were socked with a bad cold (that ended up croup with the 4 youngest girls) but no one had to be hospitalized, so we just limped along as best we could.  Dress by dress, decoration by decoration, we began to be more and more prepared for both Christmas and Jessica's wedding. 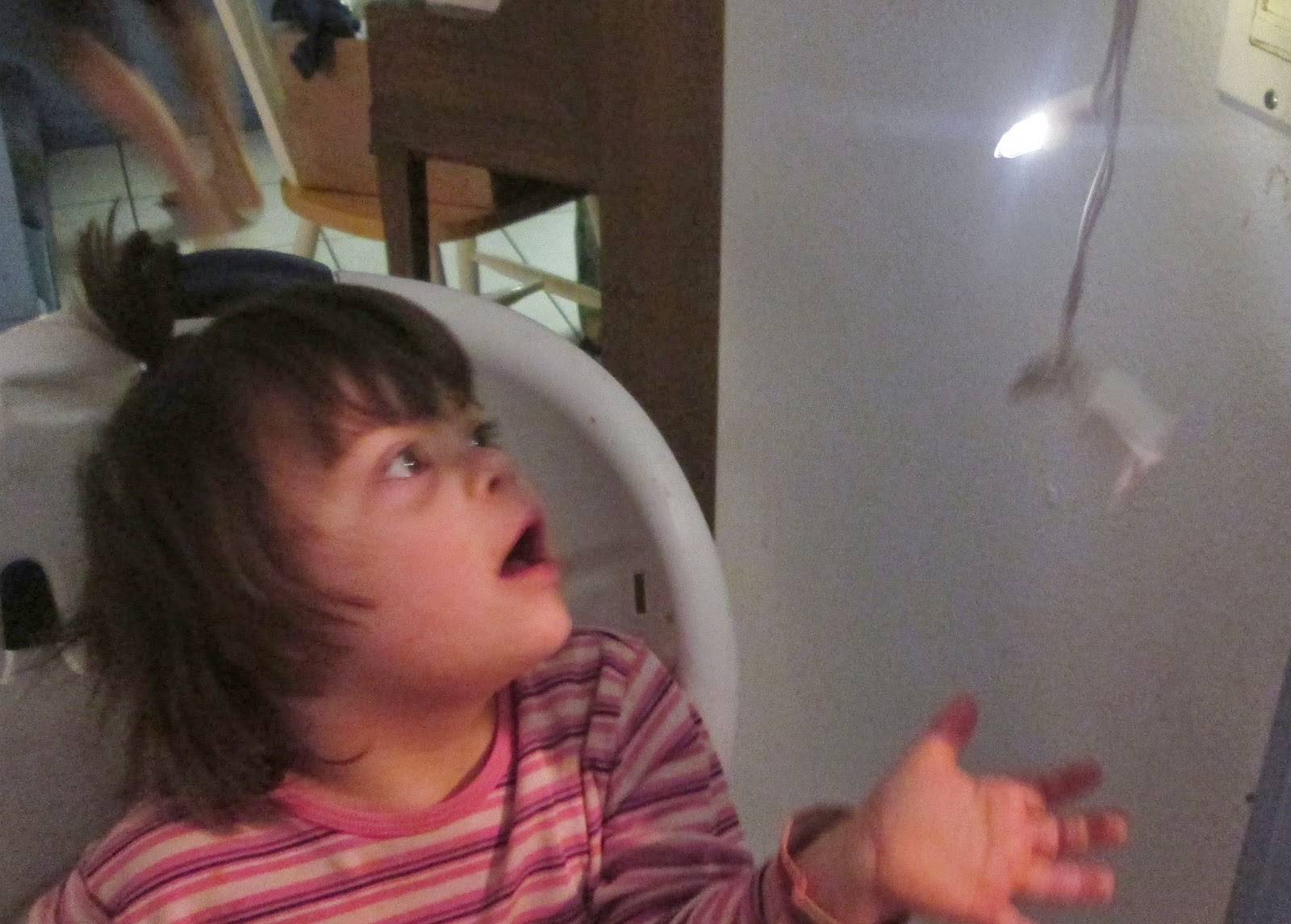 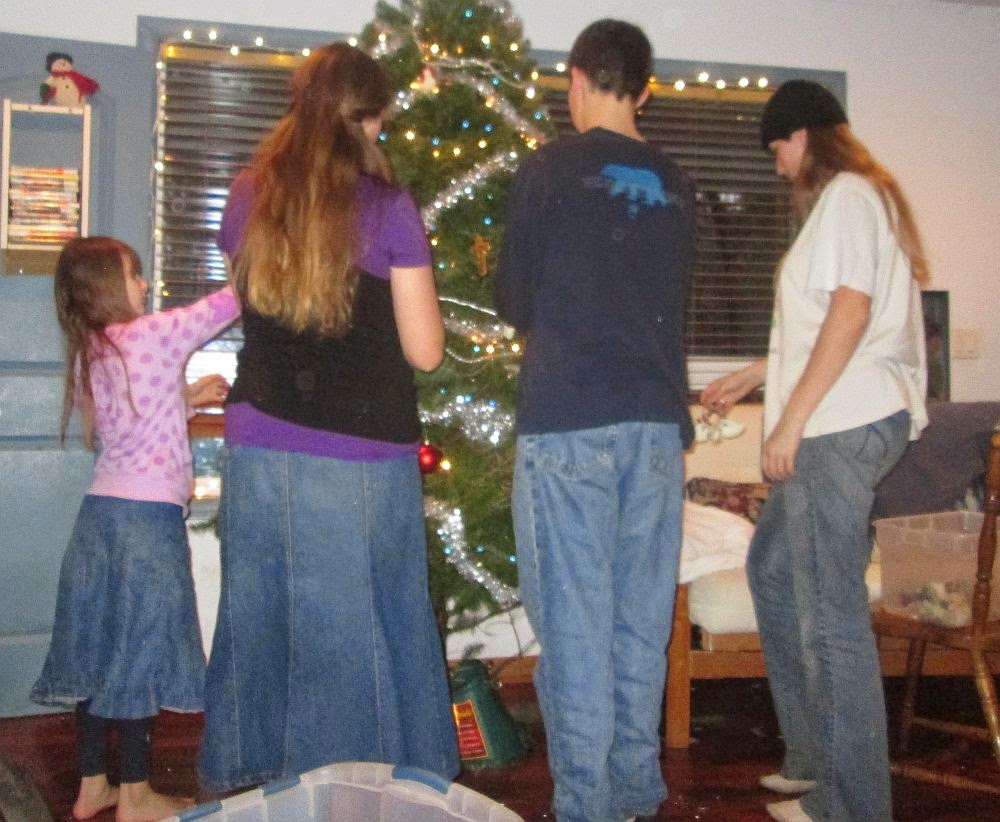 O yeah - Jessica began a courtship last June, got engaged at the end of August and got married on January.....but I'm saving the details of the courtship/engagement for a very special co-authored post coming here soon!  I will post photos of the wedding here in part 3 of this series though, so hang tight! 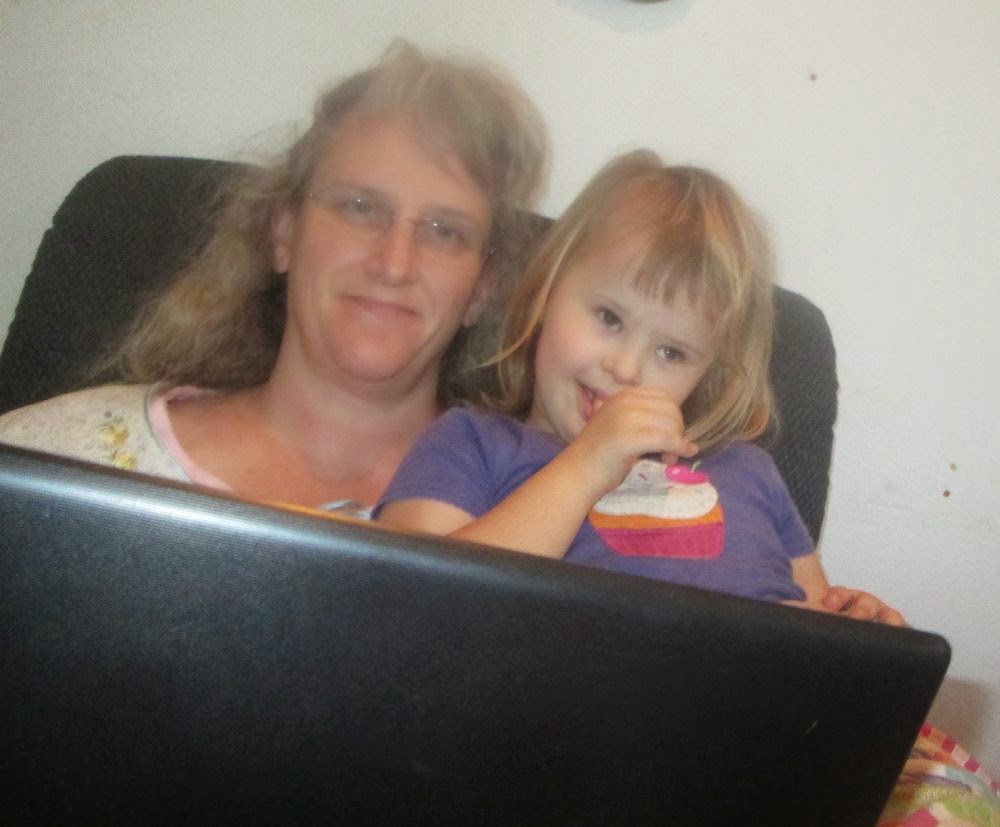 We truly enjoyed watching Christy change after her surgery.  She had more energy, she was more relaxed and she was biting less!  She had some sleep issues still, but was better at night overall.  She loves to laugh and loves to play with her siblings.  She can get Esther giggling like no one else can.  Esther loves her and whenever she sees Christy she goes to her and says "Hi, NG" - that is her name for Christy!  They are such a blessing to each other!

Carese has taken to picking up my camera and taking random photos, mostly of her feet or ours as she lowers the camera as she presses the shutter!  The above photo of Esther and I was taken by Carese!

The children got to open one set of gifts early - new pillows and sheets/pillow cases!    The pillows came in HUGE boxes, so wraping would have been silly and storing them until Christmas was not practical.  So we had them close their eyes and we dropped the boxes on their laps - two kids per box! 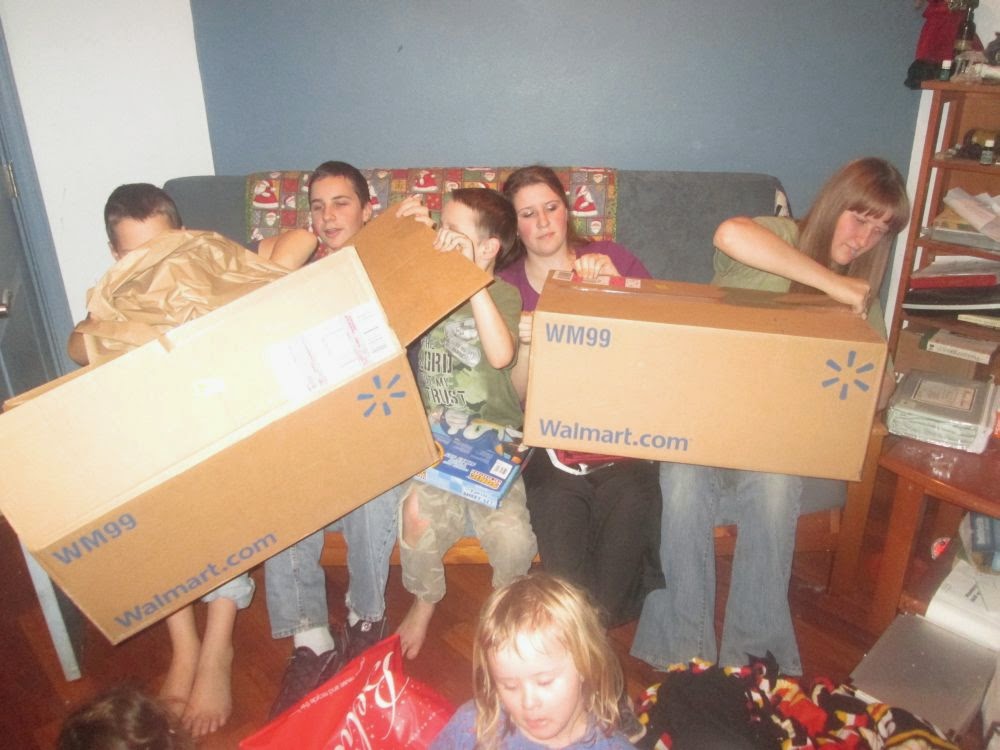 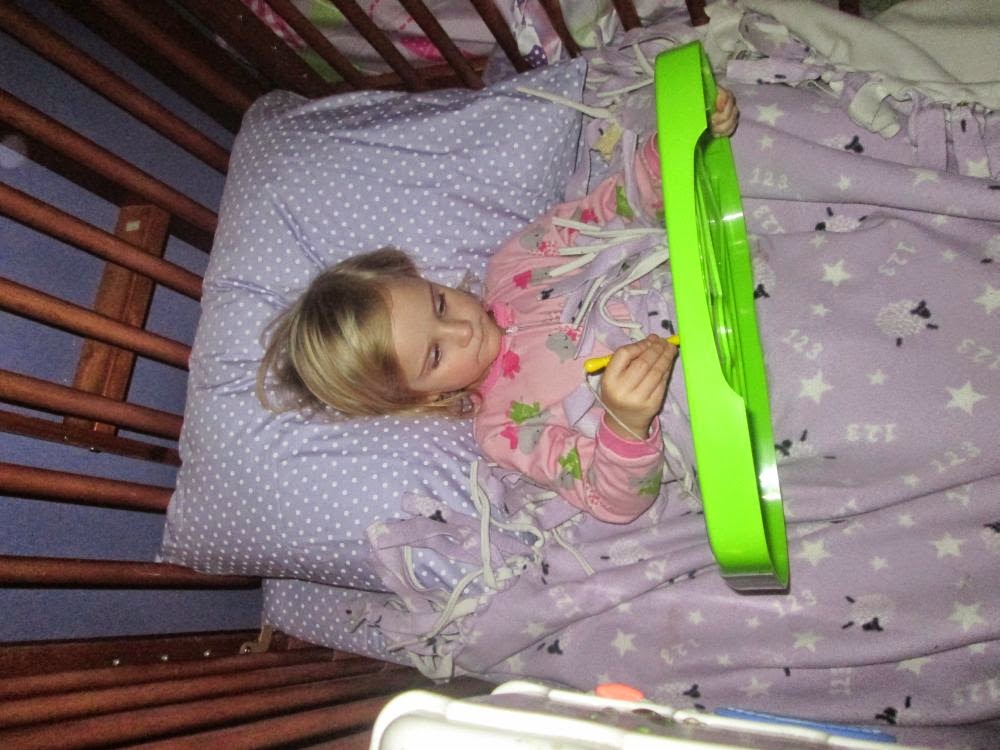 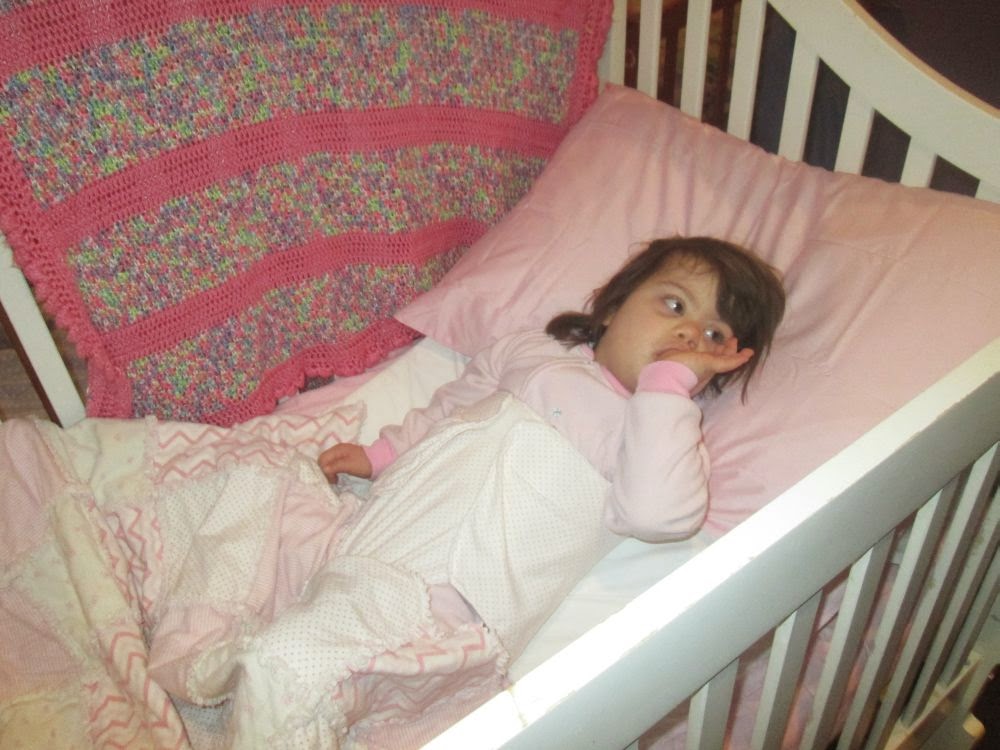 This spawned some serious bed making and bedroom cleaning.  Here are some photos of some very happy kids all snuggled down for a long winters nap! 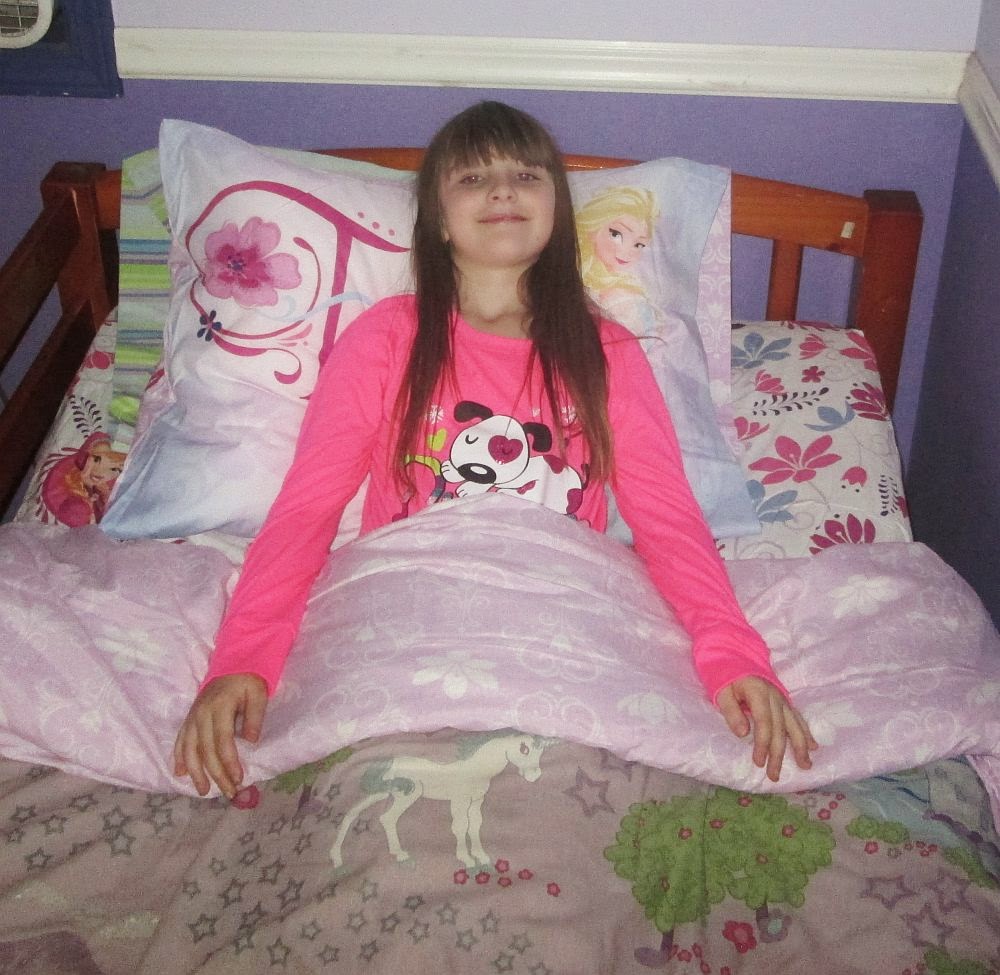 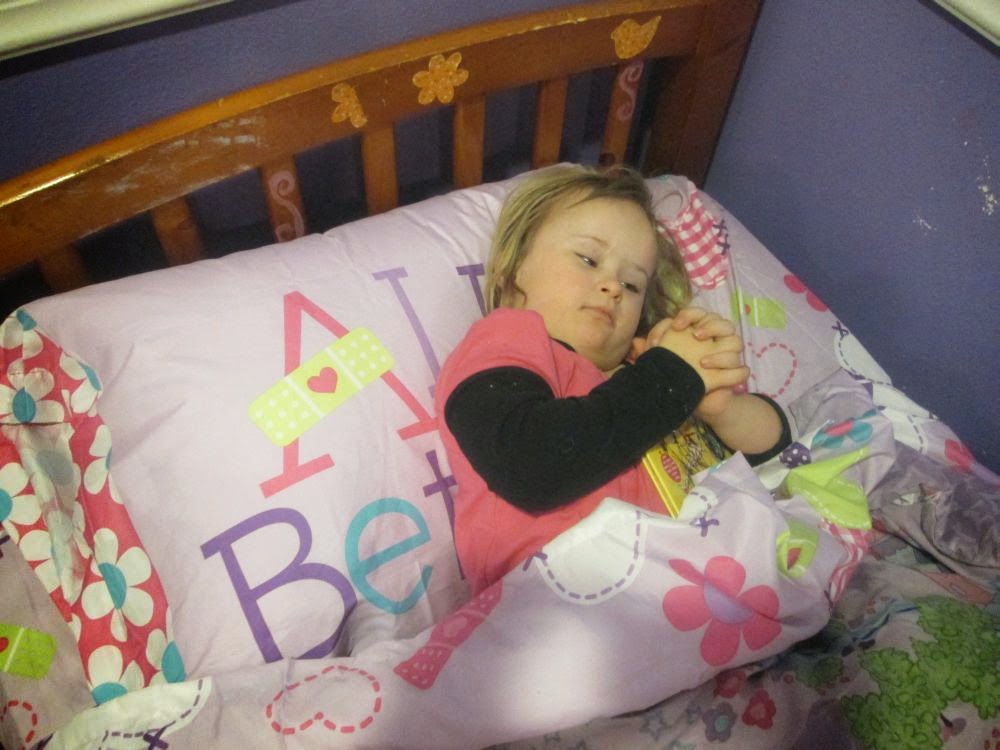 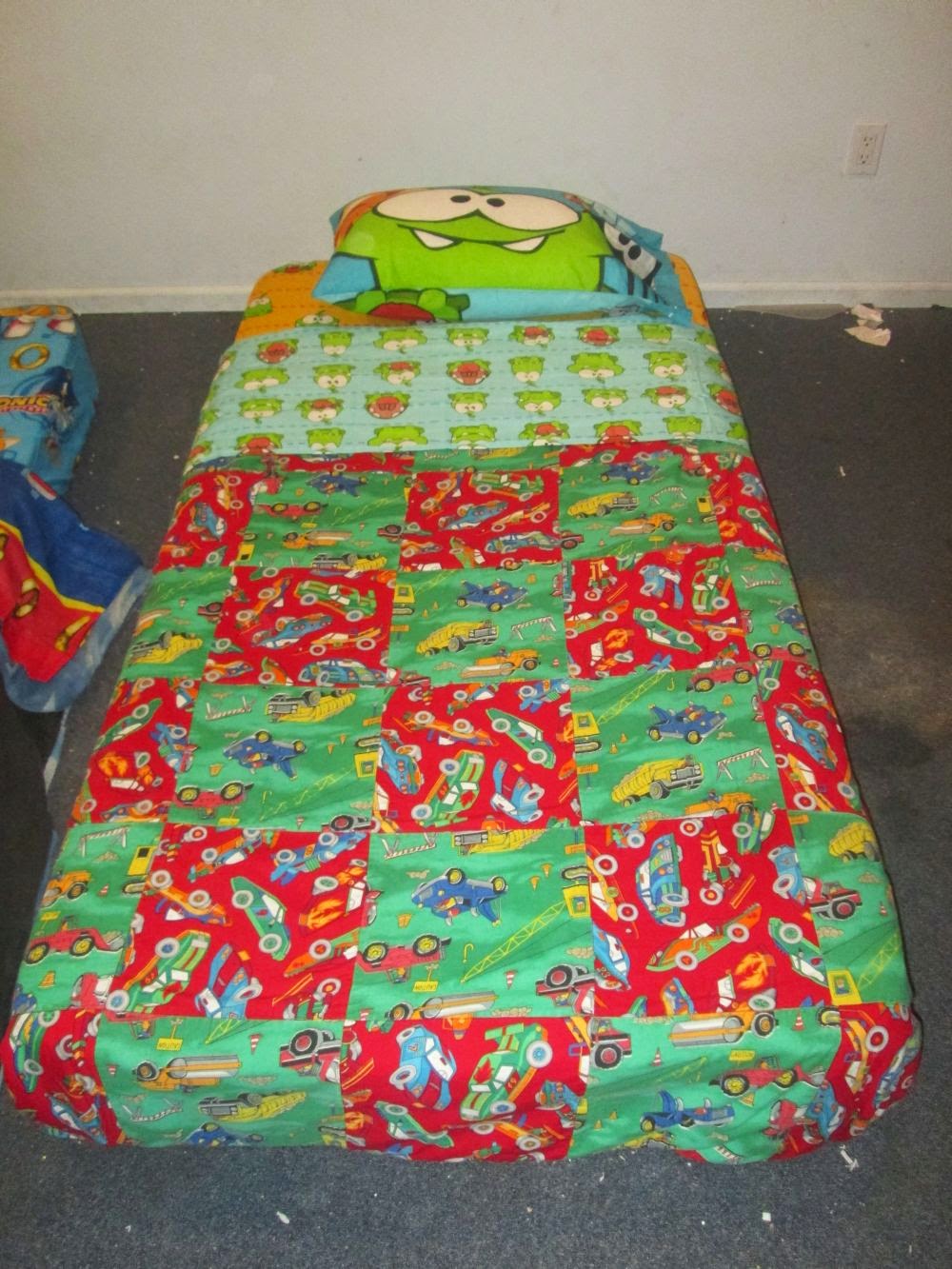 Here are also some photos of the super neatly made beds - the boys actually made their own beds and made me come take photos!!  I should have done this years ago.  But alas, the newness has worn off.....


One interesting thing has happened with Christy.  I have struggled to get her three meals by mouth along with three cans of formula into her during her waking hours.  If I succeeded with the formula she was hardly hungry at mealtime.  So I decided to try having her sleep on a wedge and get tube feedings during nap and night time.  This has worked out so very well!

By doing this (and it took several attempts to create a sling that would hold her in place on the wedge) it has also helped her sleep better.  I now believe that a lot of her wakefulness at night has been due to reflux!   I this photos you can see that the head of her crib is elevated.  There is a contraption called a "sling" that goes over the end of the mattress and then along behind her back and around her sides.  Then the end comes up between her legs and up to her armpits, where it velcroes shut.  I have had to modify this after this photo as she figured out how to undue the velcro.  Now the velcro is at the sides and the front tucks over and behind the velcro.  You can google "Danny Slings" and purchase them ready made, but I couldn't do that!  I did order the wedge from Amazon though. 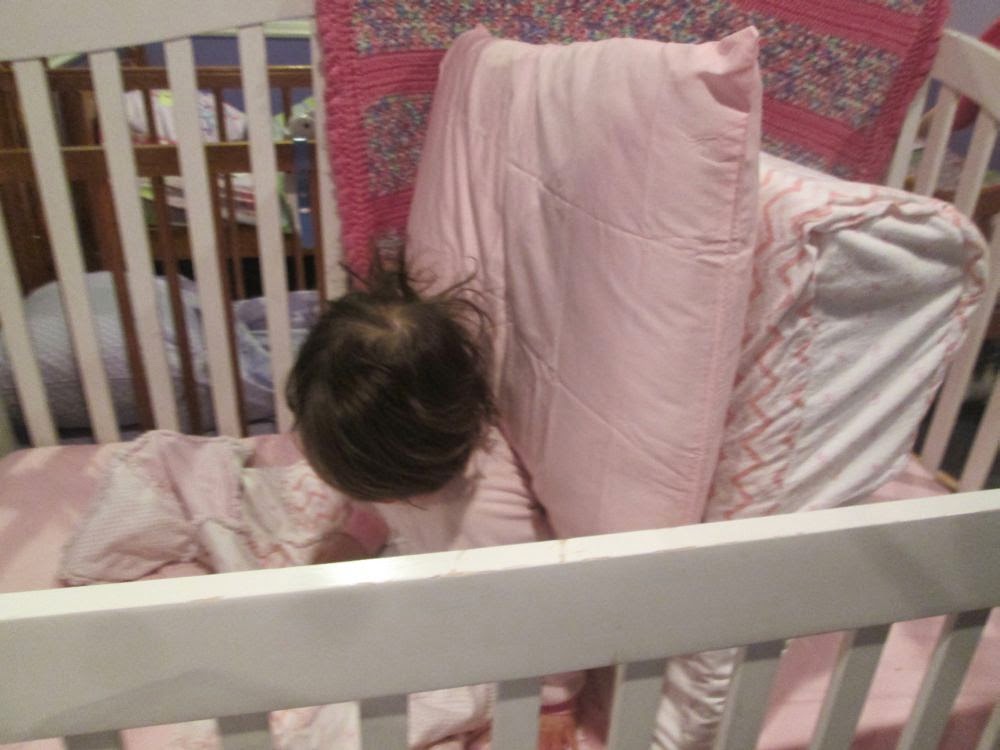 This is the first attempt with the wedge on top of the mattress - she is so strong she just sat up and lifted the wedge right off the bed! Now the wedge is under the mattress and her sling is "slung" to the mattress!


She was actually laughing in this photos as she was so pleased that she had thwarted my attempts to keep her in one place at bed time.  She still fights it and rocks and occassionally gets loose, but I have tweaked things so it hasn't happened for a while!  She is a little Houdini, that is for sure! 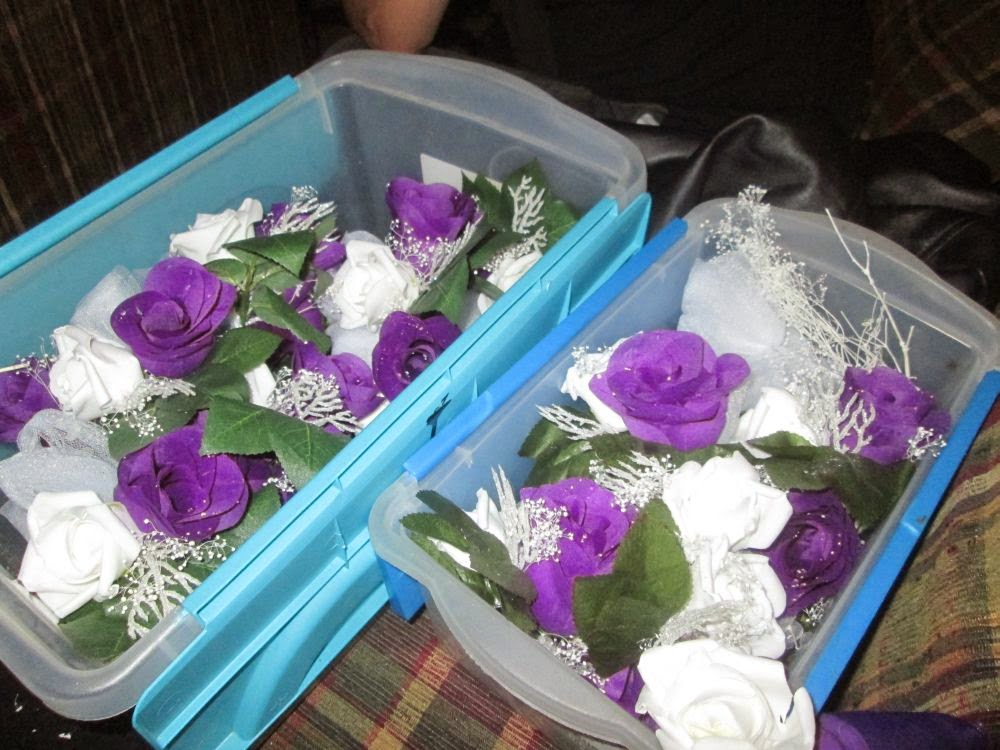 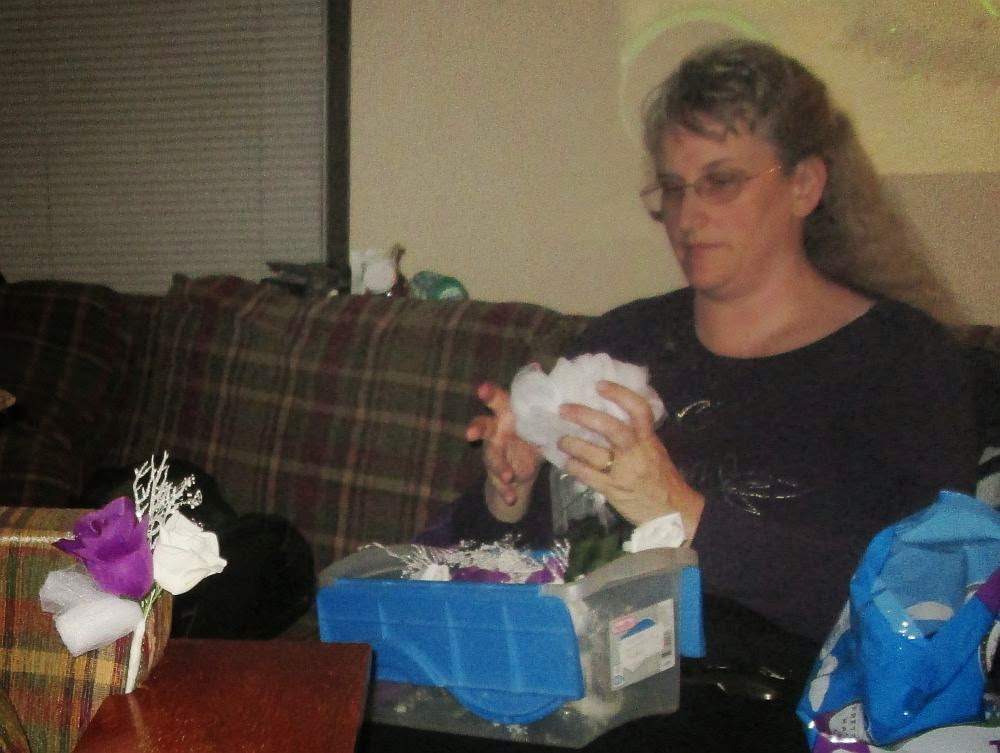 I'll leave you with some photos of me working on the wedding decorations.  I created nearly 50 corsage type decorations for decorating the church, plus about that many unique corsages for the people involved!  I also made the tossing bouquet!  It was fun to learn, but man it was time consuming!  But learning this skill with my first daughter's wedding will reap great benefits with so many more daughters yet to be married!
And here is the last - watching Seahawks and the engaged couple while making corsages at our sons' apartment.  GO HAWKS!!!! 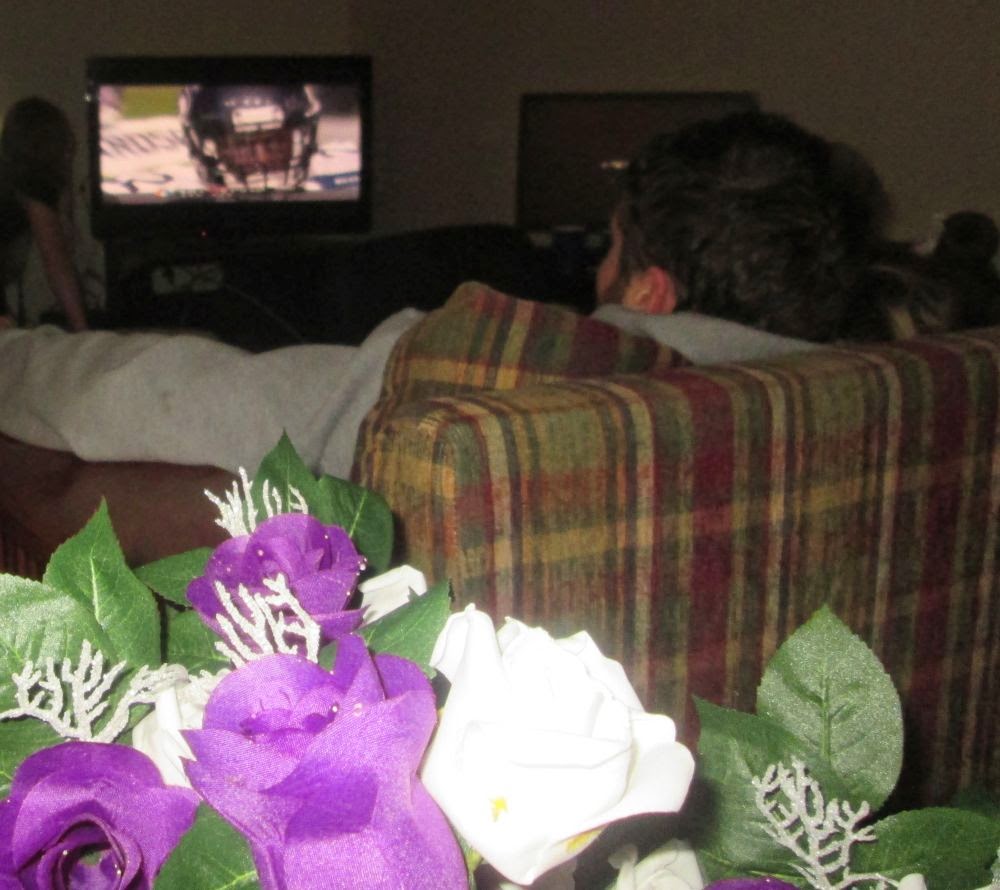