I am shocked and surprised at how different her second month home has been from her first month home. Christy's first month home was mostly spent at home, where as the past 4 weeks have been insanely busy!  I am also shocked at how badly I did at taking photos of Christy (or anyone around here for that matter!).  I will have to do better!

Christy had an appointment with the ENT (Ear, Nose and Throat) specialist.  He said that someday she'll probably need her tonsils and adenoids removed since she does snore often, but that she felt that she was on the small side and thought waiting was the better choice, but also said that we might consider getting a second opinion at Children's Hospital in Seattle.  We talked it over, and due to her sinus congestion waking her more and more frequently as night, we feel that she needs to see the ENT at Children's.  This referal has been made, but I have not gotten an appointment yet.  After seeing the ENT her pediatrician wants her to also have a sleep study done.

A couple days later Christy got to go with us to a local park to play with friends while the big people played volleybell.  Christy did so very well there, but did NOT like the swing (you know the one that is like a bucket with holes).  She was happy to hang out in her stroller or play on the grass.  She did manage to get over into the sand, but this mean mommy took her out before she could eat any!

The next week was very busy for me (Esther had a pre-surgery appt at Seattle Children's) and our family (we had a stomach illness run through about half of the family, but just one or two people at a time).  Christy had her first Physical Therapy evaluation that week too.  We found out at that appointment that it would be best to wait to get braces for her legs (to limit the range of motion as her knee are double jointed) until after she has learned to crawl.  As long as she is not weight bearing, she will not be damaging her knees.  Once she has learned to crawl, then we will be getting her braces to wear when she is practicing/learning to walk.  We have some exercises to do with her now to strengthen her legs and arms to prepare for crawling.

We had a busy Fourth of July weekend, with relative from out of state visiting in the area.  Christy got to go the beach for the first time, but it was very windy and she didn't like it at all.  She just wanted to be held.  Then we went to a family reunion (Daryl's family) at another park and she did much better there, but like best to be in her stroller.

Last Tuesday we went to another park (Esther's Physical Therapist has recommended that we take her to parks frequently to help her built coordination and strength - and it's working!).  Christy was tired when we arrived (it was lunch time) so she took a nap in her stroller - first time she's ever done that!.  Someday I hope that she will begin to be able to explore parks, but right now it's really hard since she is limited to scooting around on her bum, and she puts everything in her mouth (a really bad combination since she has a very poor coughing ability so choking is a very real hazard for her - even here at home).

Yesterday Christy was evaluated by our favorite speech therapists, Elaina.  We were greeted with excited hugs as we haven't seen her in a long time (Esther and Dayton both have seen her in the past).  Elaina confirmed that Christy does have some eating coordination issues and is also concerned with me that she is not gaining weight very well yet.  She has given me some things to do with Christy during meals to increase her awareness of her mouth, work towards self feeding and learn to drink thickened water from a cup.  I am also teaching her to sign "eat" and will work on saying "eat" and "water" to her when I am feeding her.  Elaina really wants to see her regularly but has a long waiting list.  They are going to try to get her on the schedule soon.

Yesterday Christy experienced our pool for the first time and she loved it!  She loves taking a bath, but I wasn't sure if she'd like the cooler water.  But we've had an unusually warm summer so the pool isn't too bad.  She will definitely be following in Esther's foot steps and become a fish.  Carese, on the other hand wants nothing to o with the pool!

Christy has been staying at home more recently, but that is going to change as she has lots of appointments in the next few weeks - her dental evaluation at Children's. Physical Therapy once a week, plus our annual week long camping trip!  Plus we will making more appointments for her dental work and seeing the ENT.

Overall, Christy has been exceptionally healthy and has adjusted very well to our home and life.  I have found that she enjoys shopping when she is in her stroller.  Generally speaking, away from home her safe place is her stroller.  At home she loves to explore and even enjoys spending time in the yard and swinging on the swing set (in HER swing of course).  She gets lots of attention and enjoys play.  Hearing her laugh is just THE BEST!


She also allows me to hold her hands together when I pray with her at betime - before she would resist and get mad at me!  The funniest thing is that she LOVEs to get dressed and undressed.  She giggles and giggles.  I will have to videotape this somehow.  She is getting very fast at scooting up to someone and raising her arm(s) to let them know she wants to get picked up.  She will even chase you down if you are avoiding her (for fun, of course). 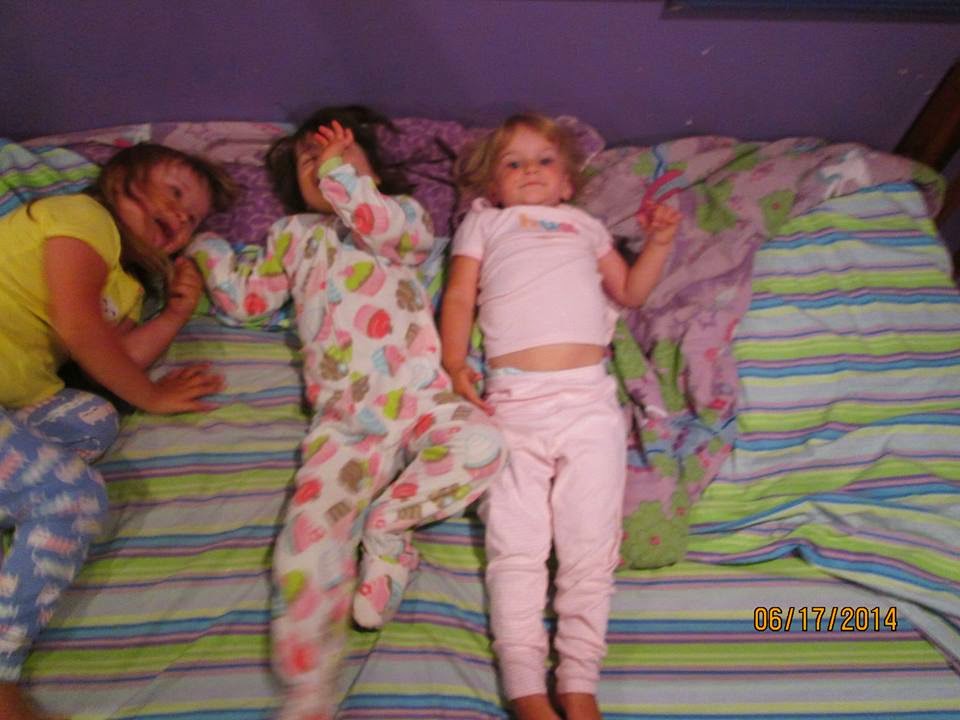 She is a very content little girl.  She rarely cries.  She usually has more of an angry cry when she gets hurt or is in pain.  It is a strange cry - almost animalistic.  Its almost like a panic kind of cry.  It is very sad to hear and really hard since we quite often do not know the cause - she just can't tell us.  Even when we know the cause (like if we see her fall over and bump her head), it's hard because it's almost as if she doesn't understand how to receive comfort.  But she is improving in this area somewhat, and I'm sure with time she will come to understand and receive comfort from us.

Christy and Carese are nearly identical in size.  Six weeks ago we found out that they were less than 1/4 in different in height and less than 3 oz different in weight.  Christy really has not grown noticeable yet so they are still like twins.  They wear the same size clothes (you can notice that Carese is wearing the same PJS that Christy is wearing in one other photo).  For a while, all the winter clothes were put on Christy, and the summer clothes on Carese.  But as the weather has warmed up, I am dressing Christy in lighter clothes so they are being dressed more similarly now as a general rule.

And now for two videos!  The first one was of Esther and Chrisy playing together, really for the first time.  This has been the biggest change in Christy's life in the past month.  Esther no long ignores her and actually loves to play with her.  At random times we will find Esther sitting down next to Christy and just giving her hugs - it is so sweet!

The second video is ground breaking stuff!  Christy is slowly but surely gaining more use of her right leg/foot and arm/hand!  In the last video, you will see her use her right hand/arm to shake a rattle!  We did have to put the rattle in her hand, but she kept it and moved it enough to create sound, and she knew she was doing it!  This is miraculous!