Monday morning was our appointment for Christy's medical exam.  This was done in a Bulgarian medical clinic, and we were taken there by our driver/translator team.  They also had her passport for us!  We went into the clinic and the lab was downstairs.  We were pleasantly surprised to see the other family there (the ones adopting the 7 yo boy).  After a fairly long wait (and listening to that poor boy having his blood drawn) we were ushered in to the room.

The room looked like a small office/cubical than a lab, although there was an exam table there.  After our entrepreneur presented our documents it was time for them to draw her blood.  I'll be nice and just say that it took three pokes, two different people trying, and quite a mess before they got what they needed and poor Christy was very traumatized by it all. 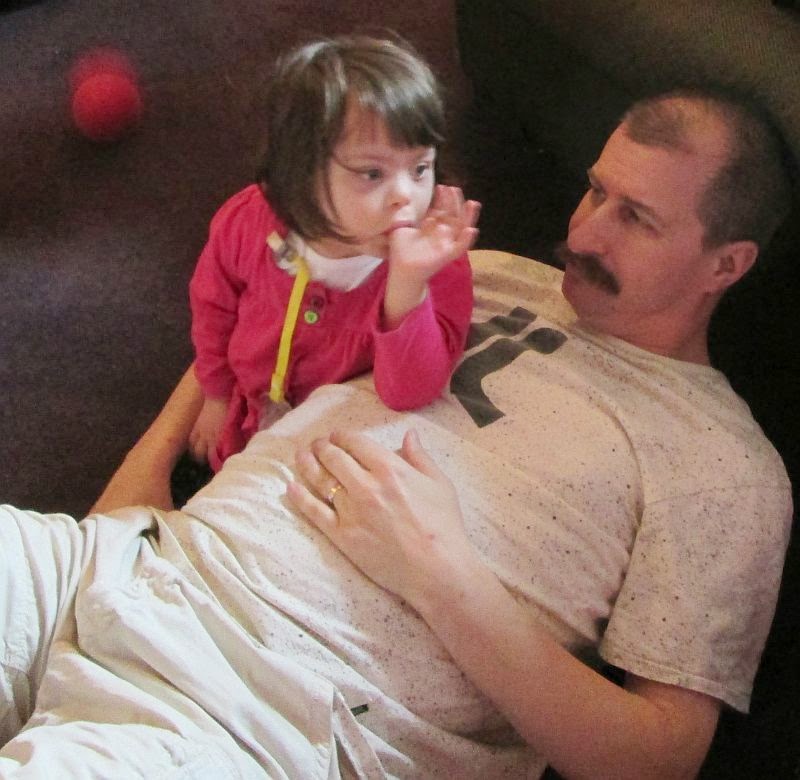 Then we headed up a few flights of stairs to the pediatrician's office.  There they listened to her breathing and lungs and looked over her paperwork.  I was surprised when the Dr turned to me and said, in English, that I was taking good care of her - this was said as they were trying to get all her layers unsnapped so the r could listen.  I think she approved or my "bundling" Christy (this ranks as the #1 indicator of a good mom in Bulgaria), but I like to think she was referring to my care in comforting Christy during the blood draw (the Dr did the final, successful blood draw).  We also found out that she weighed just over 26 pounds and was 35 inches - very similar to our 2 yo, Carese.  Long and lean.

When this was completed, we were taken to a mall so I could purchase some shoes for Christy, as all the shoes we brought were way too big.  I did find a pair that would stay on her feet, even though they were too big, and they were cute and well made.

Then we were taken back to the hotel, arriving around lunch time.  Then we all took a nap.  Then we got brave an made our way back out to Jeff's house via the subway on our own.   We not only successfully navigated the subway system, but Daryl was even able to find the way to Jeff's apartment.  It's not easy to find and they were surprised that we were able to do that!  There we enjoyed pizza from the restaurant downstairs and while Daryl played Wii with Elise, I played Settlers of Catan with Jeff and Lisa!  I surprised everyone, including myself, by winning!

Here's  a video showing how Christy reacts to "coming home" after being out and about most of the day.  She would just revel in being able to scoot around in her "safe zone"!

Then we headed home.  When we got off the subway were got to surprise a couple from England who were lost just by speaking English to them!  That was a fun little encounter all by itself!  Then it was time to settle in for the night.  Only it took a long time to get to sleep as I was not feeling well. 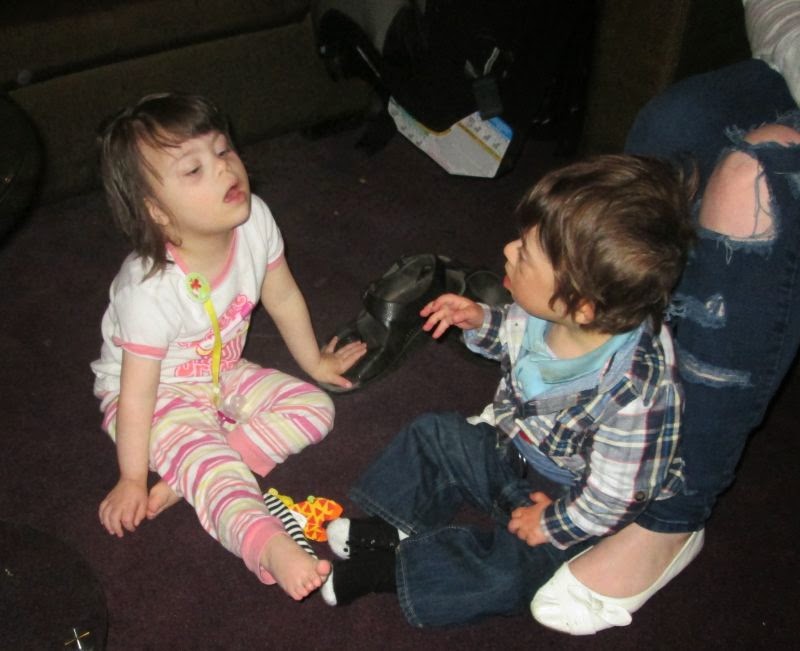 Tuesday we pretty much hung out all day in our room - none of us were feeling our best, and we had nothing e had to do so we just didn't do anything but eat and rest.  I did make a quick run to corner grocer with Corinna's sister, Sarah.  It was cloudy and windy, but refreshing.  When I reached my hotel room, it was raining like the sky was falling!  We had gotten back just in time.  Then the lightening and thunder began.  It wasn't as good a storm as I love (like in the mid west where the lightening and thunder are almost continuous), but it did have some great thunder.  Just at bedtime, as we were getting into bed, there was one bolt of lightening that was a simultaneous lightening strike and a crack that had both of us jumping out of our skin!  It was terrifying and so loud!  But within seconds we were laughing so hard as we both we so startled by it...and the thunder shook the hotel and caused car alarms to go off in the street below!

For some reason (sarcasm intended), Christy had trouble going to sleep that night, and Daryl took over around 11 pm, and finally got her to sleep around midnight.  So Wednesday we were very tired.  We ended up staying in our hotel room again all day, only leaving for breakfast and dinner, both of which we ate in the hotel restaurant.

Here's a video showing Christy in "her zone" of happiness in her high chair in the hotel restaurant!  She LOVES being in a high chair, can you tell?

Thursday was our embassy appointment.  We got picked up early, we went to the medical clinic to pick up Christy's test results (she tested negative for TB, yay!), and then went to the embassy.  We ended up getting there too early and just hung out in the car for about an hour - but I was able to feed Christy her lunch and she got a short nap.  Then we went into the embassy - in order to get through security, I had to eat some of her juice and baby food to prove that it was just that!  Good thing I liked what I brought for her that day!  It took over an hour of waiting for our "interview" and we were just asked a couple of simple questions, and that was it!  We were to leave her passport with them so they could add her VISA to is, and our attorney would bring it to us on Friday!

Thursday night Corinna and I walked about a mile to Tony's Pizza to get take out pizza.  While we were ordering there was a flash and a bang and we all just about jumped out of our skins!  Something about the fuse box - it was like a small explosion!  The lights went out too.  Good thing we were ordering wood fired pizza!  We chose to wait outside for out pizza as one guy was messing around in an ancient looking fuse box with a screw driver!  Yikes!  By now, Corinna was convinced that being near me meant that excitement was always just about to happen! Ha! 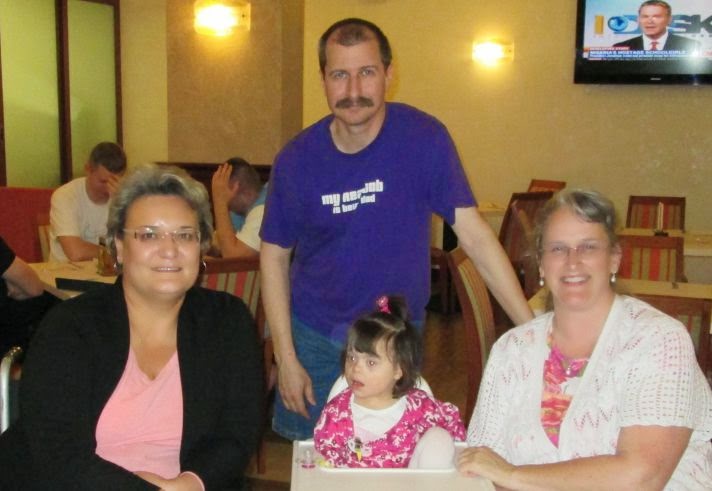 Friday was packing day, and at dinner we finally got to meet our dear attorney, Toni.  This wonderful woman has a big heart for the orphans of Bulgaria and the families who are adopting them.  I had almost daily phone calls from her and she would be praying for us on each step of the way.  When comparing notes with other adoptive families who used other agencies, Dreams Foundation and Toni far out shown the others in the care they take to keep the families in good care every step of the way.  Thank you Toni, for all you do and I count it a blessing to have worked with you to bring Christy into our family!!!

Christy providentially went to sleep the earliest yet Friday night - and it was a good thing as we had to be up and out of the hotel by 4:15 am!  The incredible trip home will be on my next blog post as there were so many unusual things that we encountered...mostly just getting out of Sofia!