I have an incredible, mind boggling story to share with you.

It really starts in 2008, when Esther was born into our family with that blessed extra chromosome.  But let me skip ahead a little first.

In February of 2010, an expectant mother got the news that mothers dread.  Through a standard ultrasound, it was revealed that their daughter had not only a heart defect, but also had Down Syndrome.  As she was dealing with this news, a friend sent her a link to my blog.  Esther was just about 1 1/2 years old at this time.  She found encouragement in what she read, and also lots of information.  She blogged about finding my blog Here.

I didn't find out about it for several months, as she had sent me a message on a board for parents of children with Down Syndrome and I had not visited that site in months.  I found her note just weeks before her baby was due.  When their baby was born, they named her "Verity" which means truth.

I found her blog and began to follow an amazing story of the love a family can have for a precious baby with the gift of Down Syndrome.  But it didn't end there.  Susanna read This Blog Post about the plight of children with special needs in Eastern European orphanages and her eyes were open to the truth.  This led to their adopting Katie, a 9 year old with Down Syndrome, hidden away in the top floor of a terrible orphanage.  She weighed just 10 1/2 pounds when she was ransomed.  She required specialized medical care to preserve her life as they transitioned her to good medical care and proper nutrition.

Katie blossomed in her new family.  She grew and learned to do so many things so quickly. (Susanna and her family are now adopting Tommy from the same orphanage that Katie was in).

But the Mussers weren't satisfied with just saving one child.  They worked to make changes in that orphange, and changes were made.  The director was fired and fundraisers were done to provide proper medical care for the orphans there.  They spread the truth of what was going on there and so many families have stepped forward to ransoms these deprived children.  The Mussners have ransomed another child there, 16 year old Tommy. He has been home for a while now and is blooming too!

When I read about the things happening on the other side and world, and what a difference a loving home can make in the lives of these forgotten, abandoned children with special needs, I was inspired to act.

I knew there were so many others still in those dark, filthy places where children were not properly cared for.  So I had to act - I started advocating right her on my blog and on Facebook.  I selected some children and a family to advocate for.

But God wasn't satisfied with that level of involvement.  He pushed us to consider adopting a child into our family.  This was WAY outside our comfort zone, but God was relentless.  We tried and failed to adopt a little girl from Russia (before that evil ban was put in place).  We discovered "Priscilla" in January.  We tried again in January and found success.

Priscilla, Whom we re-named "Christiana" and we call her "Christy", is the daughter we didn't know about until just over 3 months ago.  But God knew she was our daughter a long, long time ago.  Do you know how I know this?  Because I discovered something tonight. 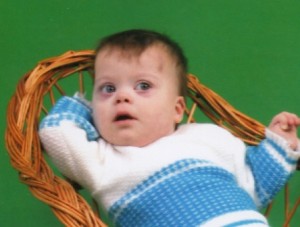 So Christy's story starts way back in 2008, when God blessed us with Esther and opened our eyes to the wonder and joy or raising a child with Down Syndrome.  And then, way back in February of 2010,  Susanna was given her news and she found my blog,  and Christy's mommy was just finding out that she was pregnant.

So God, in His sovereignty, put into motion the events that it would take for us to discover Christy just when He had prepared the soil of our hearts to be ready to adopt.  Before Christy's mother could possibly know that she had Down Syndrome, God knew it, He had designed her that way.  But He had a plan, and that plan has been in place long before we had any idea that God had a plan like this for us.

I can't wait until the day that I can tell Christy that God prepared her place in our home for her before she was even conceived.