Everyone needs second chances, I know I do.  I had to give someone else a second chance today and it was sooo worth it!

When Esther was just teeny tiny and we were trying so hard to get her home from the hospital, I had one of the worst days, I was so disheartened.  I wrote about this day in a post entitled "It's Sooo Hard" and I talk about an encounter with the pediatrician who was caring for Esther during that time.  Every 3 days or so we'd get a new pediatrician and see saw back and forth as to what is would take to get Esther home.  I was very offended at a remark he made and have always held this against him.

Until today he's never been the on call doctor when I needed to take Esther (or any of the children) in to be seen when our doctor was not available.  I always ask who's on call, as I prefer to have Esther seen by a doctor who has seen her before when she is ill.  When I heard who was on call, Dr F I'll call him, I almost decided to wait, but Esther really needed to be seen again and soon.  So I decided to make the appt anyway.

But first a  little more background to set the stage for this second chance.  Children with Down Syndrome tend to have very tiny everything - fingers, toes, heads, forearms, upper thighs, blood vessels, ears, airways and ear canals.  Esther has typically sized things for all in the list except the internal ones.  And her ear canals are tiny - and one is exceptionally tiny.  Since she was just a baby she has HATED to have anyone, even me, mess with her ears at all.  Don't even go near them...when a doctor holds the otoscope she starts to cry and tries to hide.

As I was waiting for the doctor to come into the room, I could hear him talking in the room next door and in my room was a battle....no, Esther was quietly snuggling in my lap (a sign that she's really sick as she's usually trying to escape out of the room).  The battle was in my mind.  I was so ready to have an attitude when he came in.  But I kept reminding myself to think on "whatsoever things are true..." and during the time we worked with Dr F before I was sleep deprived and in a very difficult situation to say the least.  I kept reminding myself that I had heard from others that they just loved him and that he was so good with children.  I forced myself to be pleasant, friendly and "pretend" that we were seeing him for the first time - I reasoned also that he sees so many babies that he probably wouldn't remember us anyway!

So, in he walks - he immediately focused on Esther, saying "hi" and getting her to interact with him.  While he and I talked he was gently warming up to Esther...by the time he was going to listen to her breathing, she was starting to get a little concerned, but he comforted her and talked to her and before I knew it, she was sitting quietly while he listened...she has been doing so much better lately, that I chalked it up to getting accustomed to the procedure.  Then it was time to look in her ears...I braced for the battle...he started talking about birdies and doing little whistles (this has been tried and met with failure by several doctors in the past), but his whistle was sweet and bird-like.  And then the miracle happened - she allowed him to look in her ear while she sat quietly...I was dumbstruck...but that ear canal was larger and more accessible, the left ear will be different, right?  Kind of - she fussed a little, and he just put light pressure on her head and she calmed right down and let him look into her ear for a good long time!  Even then, he only got a half glimpse of her swollen, pink ear drum, but enough to confirm that the antibiotics she was on were not doing the job.

And  here's eye candy - first a photo taken the day before my "first encounter" with Dr F:
And here's Esther last week at her daddy's softball game: 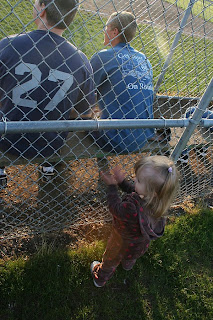 What to you think - would Dr F have recognized her???