This is the first installment of what I would like to call "His-Story - God's Grace in Our Lives".  These will be stories about times when God moved in mighty ways to accomplish His will in our lives and to show us His grace, sovereignty, compassion, faithfulness and love.  I have been pondering on this for nearly a year, and now it's time to start.  But where to start?  I originally thought this would be stories about His-Story in our lives as a family, but I realized this week that I had to go back farther...much farther - back to the beginning of my life and how much God moved to bring me into this world, and how He kept me here through several life-threatening experiences.  I hope you enjoy the stories, and here is one of my favorite stories of all time!

My mother and father already had experienced the ups and downs of a large family (for their time).  My mother had recently become a Christian, but my father was still an unbeliever (or so my mother thought).  They had 2 boys, and 2 girls, perfect right?  My father was going through some difficult and trying times at work, and my mother's last 3 pregnancies had ended in miscarriage, two of which were later in pregnancy and life threatening for my mom and traumatic for my father and older siblings.  Her doctor even told her not to come back to her if she got pregnant again!  Their last child had been born with a mild birth defect, but it required several surgeries in her first few years, and she dealt with difficult things like temporary hearing loss and difficulty breathing making daily life difficult.  My father was done, he had more than he could handle, he was content with the children he had.  My mother, on the other hand, yearned to have another baby.  I can relate to this - after my miscarriages and after having Esther , I did and do desire to have another baby, probably to find healing I suppose, and I have talked with other moms who have felt the same way after miscarriages, twins or having babies with special needs.  So, my pregnancy was not exactly met with excitement on all sides...even my mother did not expect this baby to survive pregnancy.

My mother was uncomfortable through her pregnancy with me, she was 35 and that in itself makes for a more uncomfortable pregnancy I can tell you.  At one point, her body was threatening to miscarry me, and she went to her doctor to see what was going on.  He said that she would probably miscarry...when my mother expressed her sorrow at that thought, he was surprised...she already had more than enough children, why would she want another one?  She wanted this baby more than she could share with this doctor who had no understanding of maternal instinct.  She prayed that this baby would make it.  She did not miscarry, and actually went past her due date!

After two attempts to induce labor, as she was more than 3 weeks overdue, my mother went to yet another appointment with he doctor, and he told her that this baby was just not ready yet...at six weeks past the due date???  So she went home, got the other children home from school, and started to make dinner.  Suddenly she was experiencing pain from one hip to the other, and it didn't seem to be going away.  Shew as very uncomfortable and felt that "something is not right".  So my father took my mother to the hospital at 8 pm that night.

When my mother was checked, the doctor told her that she was dilated to 2 cm, but he wanted her moved to the delivery room anyway.  Once settled in the bed there, my mother experienced all the pitocin that had accumulated in her body through the two IV induction attempts.  She heard this terrible screaming, not knowing it was herself.  My father, 4 stories down in the waiting room, heard this scream, but had no idea that it was his wife!  Immediately my mother began shaking, and heard the doctor say "you have a baby girl" - looking at the doctor she saw that he was holding me like a football - still in his street clothes even.

He laid me on a little table by her bedside.  She saw a little baby with skin hanging in loose folds off her body, but with a beautiful face and she even smiled!  My skin had already begun to decompose, and I was covered in meconium.  The doctor told my mom that he would have to do some repair work on her right away, but that she'd have to come back in later for further repair.  My mother remained in the hospital with me for 5 days.  I weighed just 6 lbs 13 oz - the doctor said I had probably lost 1 1/2 to 2 pounds due to dehydration and a deteriorating placenta.  I was born at 8:30 pm, just 1/2 hour after arriving at the hospital. 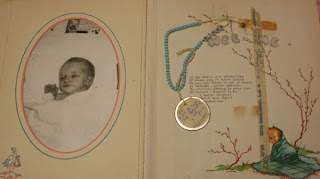 My mother says that as a newborn, I was like a 6 week old baby - sleeping through the night, smiling, laughing within the first week.  She had to take special care of my skin for a while - no bathing, she had to use a special cream, and just dab it on, no rubbing, as my skin would just come off with rubbing.  She said I was a good baby and did lots of sleeping.

During my first year, I had several bouts of pneumonia, probably due to meconium aspiration and second hand smoke.  But I survived all of those as well.

God had a plan for my life, and He brought me into this world despite all the situations that would cause people to think that it wasn't meant to be.    My birth story is a story about God's sovereignty, God's Grace, and God's compassion.  My mother had a miracle baby (that's what the neighbors all called me).  She was so convinced that I would not survive that she had not prepared at all - no baby clothes, no baby things...but God provided all that as well.

In looking through my baby book this morning, it is full of cards and the list of baby gifts is long...looks like most people recognized a miracle when they saw it too! 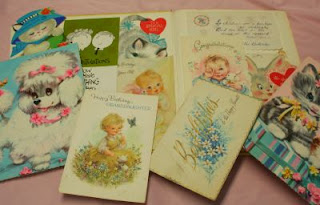 So, why did I start our His-Story with this story?  Because I wanted to share with you that God had a plan for my life.  A plan that was not apparent to others, even my parents.  God says in His Word, in Jeremiah 29:11 -

" For I know the plans I have for you,”
declares the LORD,
“plans to prosper you and not to harm you,
plans to give you hope and a future."
He had a plan for my mother, my father, my siblings, myself and for you.  In Psalm 139 He says,


"3 For you created my inmost being;
you knit me together in my mother’s womb.
14 I praise you because I am fearfully and wonderfully made;
your works are wonderful,
I know that full well.
15 My frame was not hidden from you
when I was made in the secret place,
when I was woven together in the depths of the earth.
16 Your eyes saw my unformed body;
all the days ordained for me were written in your book
before one of them came to be.
He knew, even before I was born, God knew how many days I would live on this earth.  I thank God for His touch on my life.  I praise Him for leading me down paths that I would not have chosen for myself, but that were for my good and His glory.  He does all things well.
God is so awesome!  I am amazed at His love, compassion and almighty power.  I stand in awe.  Praise be to God who does all things well.
Posted by Ruth E at 8:25 AM